My apologizes to my RSS readers.

I posted a really stupid entry and honestly, I don’t even know why I did that. It was nothing big, just a disjointed entry about my NaNoWriMo progress that I was trying to make funny, which it was not.

I’m in a really funky mood right now. I feel RESTLESS and ON EDGE. I just made a fool out of myself in an email and had to kiss some butt to make it better.

I’m distracted, impatient and ready for … something, I don’t know what. I haven’t walked in a while, I think I will tonight and burn off some energy – maybe that’s my problem, I’ve been sitting around too much and not being very active.

I have a MOUNTAIN of laundry to catch up on from camping this past weekend. And I feel like my house is just … cluttered.

No one to blame but myself for that one – I’m the clutter bug in my family.

My husband’s birthday is next Tuesday and I have NO CLUE what to give him and he won’t give me a straight answer when I ask him.

“What do you want for you birthday, dear husband of mine?”

“I just want your love, honey,” he says.

Swell. That’s not very much fun to unwrap … then again, it COULD be. *winkwink*

“I just want black socks,” he says when I push him more.

Are you kidding me?! How exciting is it to open black socks? (He goes through black socks like you wouldn’t believe and saying he wants black socks is sort of a standing joke in our family – but as you can see, I’m not laughing).

My family is spoiled; I spoil them. I like to make a big deal out of their birthdays (GD was born on the husband’s birthday – yes, I gave my man the ultimate birthday gift, a son) and this year, I’m at a loss as to what to do.

Not only do I have no idea what I’m buying the husband, GD’s 16th birthday is this year and though I had toyed with the idea of giving him 16 gifts, he’s a boy with virtually no interests outside of video games and computers – that crap is expensive.

So, I’m playing around with the idea of making a money tree for him, what teenager doesn’t love money, right?

I’ll be posting excerpts from my 2008 National Novel Writing Month project, Racing Heart, every Tuesday in November. I have comments turned off, not because I don’t want your feedback, but because I can’t afford to think too much about what I’m doing at this point – I hope you understand. 🙂

The story is progressing nicely. I’ve been playing around with writing it from the male protagonist’s POV and this has not only given me more material, but it’s giving me a better look at my male protagonist. I hope by doing this, it will make the story richer, more satisfying.

So far, I’ve been pretty faithful with my writing and am writing every day. I took a day off yesterday (and felt TERRIBLY guilty about it!) thereby dodging my first burn out. I plan on holing up at the university library today – I have no intention of breaking my writing momentum at this point. The third week looms though, and I traditionally struggle through the third week – we’ll see how it goes this year.

“You sure as hell weren’t paying attention,” said the tall, thin man on the left-hand side of the bed.

“Right dad,” Julie scoffed. “It was my intention, all along, to kill my only brother. You caught me. It must feel great to be right all the time.”

“Now see here, missy …” the man said while moving around the bed toward her.

Julie’s entire body tensed. Though she was sure her father wouldn’t hurt her, she wasn’t sure she could count on that.

“Dad,” the male voice from the bed said. “Leave her alone.”

“Alex! You’re awake! Mike, our son is awake!” The slightly pudgy woman leaned in closer to the prone figure in the bed and lightly took one of his hands.

Mike smiled gently as he looked back at Alex. “I can see that, Helen. Welcome back, son.” He stood on the other side of the man and lightly patted his shoulder. “Now stand back Helen, allow the boy some breathing room.”

Julie Meadows tucked herself into a corner of the room and stayed away from the cozy scene in front of her. She watched as her parents’ normally stern, serious faces relaxed and softened as they looked down at Alex. She couldn’t remember the number of times she had witnessed this transformation in her parents as they talked to Alex over the years or how many times she had wished they would have looked at her the same way.

She knew her parents loved her, but she also knew they loved Alex more. Alex was their golden child, their prize child. They had trained and primed him to be a race car driver and he had fulfilled every one of their dreams. Together, father and son had made quite a name for themselves over the years. The Meadows Match, the racing industry had dubbed the father and son team. They had been unbeatable.

It had been a long 48 hours and she was exhausted. She leaned up against the wall and crossed her arms. Would her brother remember what happened?

Would he remember whose fault it was?

“Julie?” Her brother called for her.

Julie straightened away from the wall and approached the bed. Her mother reluctantly shifted positions to allow room for her but kept Alex’s hand in her own.

“Hey,” she said softly, her smile gentle and full of love. “How are you feeling, bro?”

“So in other words, pretty much like normal,” Julie said with a chuckle.

“Yeah, pretty much,” he grinned and Julie could see her mother squeeze his hand. “What happened?”

Julie shot a quick look at her father, who shook his head in warning. He didn’t want Julie talking about it.

“Fender bender, my ass,” he shot back and Helen sighed.

“Sorry ma,” Alex said but kept his eyes on Julie. “Straight up, Jules, why am I here?”

“You had a little accident, Alex, don’t worry about it,” her father said. “You just concentrate on getting better.”

“Okay,” Alex began slowly. “So, what’s wrong with me.” His eyes shifted from each person in turn before coming to rest back on Julie.

“You mean other than your being retarded?” Julie quipped with a grin. “Nothing,” she paused and her smile disappeared as she looked at her parents. “Actually,” she said, her tone of voice turning serious, “we’re not sure yet. We haven’t seen the doctor yet this morning.”

“But I’m sure everything is just fine,” her mother said and continued to stroke Alex’s hand reassuringly.

Alex squirmed and tried to find a more comfortable position in the bed. He grimaced slightly before freezing, his expression a mask of concern. “Can anyone tell me why I can’t feel my legs?”

“Oh sweet Jesus,” Helen groaned and sank into a nearby chair.

“What do you mean you can’t feel your legs, son?” Mike asked.

There was a pregnant pause while Alex stared at the ceiling. A myriad of emotions flitted across his face – determination, concern, alarm and finally, horror.

“I mean,” he said, his Adam’s apple bobbing up and down nervously, “I can’t feel my fucking legs.”

“That’s because you broke your back, young man,” the doctor said as he grabbed Alex’s chart from the door and stepped into the room. “You’re paralyzed from the waist down.”

“What?” Alex blinked at the man several times.

Julie had to turn away from Alex’s tears. The only other time she could recall ever seeing her brother cry was when they had found their golden retriever, Butch, dead on the side of the road, the result of a hit-and-run driver.

Alex had been twelve, she had been eight.

Julie left the group of people and went to stand by the window. It was a beautiful winter day. Sunlight reflected off the ice in the trees and sprinkled tiny gems of light across the fresh snow. The light bounced off the granules of moisture and winked up at her, it was breathtaking.

The silence in the room was nearly overwhelming. Julie reluctantly tore her gaze from the peaceful scene outside to look at the group surrounding the bed. Her father looked shocked, beads of moisture dotted his forehead and his cheeks were tinged with green. Her mother had Alex’s hand tucked in her own and pressed against her cheek. Fat, salty tears ran down her cheeks and seeped between their intertwined fingers. The doctor stood at the foot of the bed, quietly turning pages in Alex’s chart.

Alex was staring directly at Julie.

Julie felt faint from the guilt. 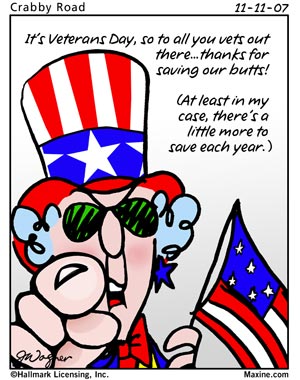 Thanks Dad, and every other Veteran out there. We love you!!