I was sitting here, watching “Grey’s Anatomy,” (I’m embarrassed to admit that I watch A LOT of TV since starting this job – who has the mental energy to read a book nowadays?? Not me!!) and something from the show reminded me of something I wanted to blog about …

Someone in my family is now an organ donor.

And it’s not Kevin.

Who does that leave?

Since I’ve been working, I haven’t spent that much time with my boys. On the surface, this sounds like a bad thing, however, it’s actually not. Because you see, I’ve mother-henned my kids TO DEATH. So much so, that if I didn’t do something, they would grow up to be pansy-ass excuses for men.

And I’ll admit, that was a big deciding factor to my GETTING a job, quite frankly. Because I figured if I wasn’t around then the boys would be FORCED to grow up.

I have to admit, I’m beginning to think that theory is paying off.

*Side note: I also got a job because A. I was bored staying home. B. I wanted to start financially contributing to the family again. And C. Kevin didn’t think I’d really do it. He said the same thing when I got my job at Wal-Mart, too. Silly husband. Don’t EVER doubt me when I have my “serious” face on. I’d link to my serious face, but it’s just too scary to share, actually.

My working has been especially good for Dude. He’s had to do a lot, by himself, without mommy holding his hand. He opened up a checking account. He is taking care of my Amazon book store. He taxis his little brother all over town. He’s going to college three times a week.

And he got his driver’s license renewed – ALL BY HIMSELF.

I gave him a brief overview of what to expect and said, “you have until March 25th to get it done. Bye.”

I wondered if he would do it. I suggested that maybe Kevin needed to take him and “just show him what to do the first time.”

But Dude refused Kevin’s help. He picked out a day that Kevin and I were busy and he got it done. By himself.

And I saw the renewed license to prove it.

He even paid for it with his own money.

I know this may not sound like a big deal to most of you, but we’re talking about the son who is afraid of his own shadow. The son who would rather crawl under a rock than talk to you. The son who would duck into a dark alley to avoid making eye contact you. He’s timid, shy and very, very interoverted, though I’m not so sure about that last part anymore. He really seems to be growing up and it took removing me from the equation for that to happen.

I’ll try and not take offense to that.

But honestly, I was so proud of him!! And I told him, in a very understated, “cool mom” sort of way. But inside I was screaming with excitement! Maybe now, NOW, finally, my son would finally grow up.

And that part shocked the hell out of me. This is the son who nearly barfs when he finds a hair in his food.

And he’s going to donate his organs?!? 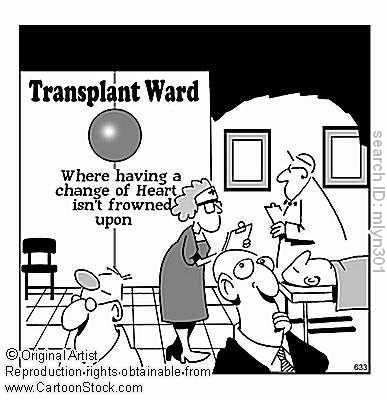 I was immediately proud and ashamed at the same time. I was proud of him for doing something so GROWN UP. And kind. And generous. And GIVING.

And I was ashamed of myself because I am not an organ donor. And neither is Kevin. Though we’ve both talked about it several times – we’ve just never done anything about it.

My oldest son taught me something – it’s time to put my convictions where my mouth is. I’ve been standing up to this flu shot fiasco, it’s time to sign on the dotted line and be an organ donor.

I wish I could relay to you how HUGE this organ donor thing is to Dude. I never, in my wildest dreams, thought the boy, excuse me, THE MAN, would be capable of making that decision. This is the son who is deathly afraid of heights, of flying and roller coasters.

And has voluntarily become an organ donor.

But you want to know a secret? Though I’m surprised he’s taken this first step toward adulthood, I was sort of expecting it. Because even though I gave birth to this boy, raised him, drilled him so hard on spelling words that he cried and begged me to stop his entire second and third grade of school, and for all the talk of “knowing him,” I’m not sure I do. Not really.

I have a feeling my first born is just getting started and I can’t WAIT to see what else he’s capable of.