Saying goodbye was harder than she thought…

“I feel sick,” Bonnie closed her eyes and focused on steadying her stomach. Now was not the time to projectile vomit all over the woman across from her.

Bonnie narrowed her eyes at the woman. “Really. I’ll be fine?” Her voice raised several octaves; she tried to clamp down on her rising hysteria. She shook her head back and forth; her damp, greasy hair slapped her cold cheeks with each movement. “I can’t do this … I want my baby … don’t take my baby …!!

She vomited all over the woman in the suit.

This is a themed writing meme hosted by Jenny Matlock. The goal is to write something that does not exceed 100 words (not including said prompt). The prompt is in italics.

I’ve spent most of my Sunday fighting yawns, drinking coffee and researching our Chicago trip …

… that’s coming up in about three weeks.

We’re driving to St. Louis, are staying at our favorite Drury Inn (seriously ya’ll, the “complementary” breakfast is pretty darn awesome. Course, it’s not totally complementary, it’s included in the price of the room, BUT STILL! It beats going out the next morning and looking for some place to eat), then boarding the Amtrak train the next morning to Chicago!

ALL ABOARD FOR SOME FUN!

(Yeah. That was pretty corny).

Kevin found a hotel. He’s pretty awesome when it comes to researching hotels in new places. (Fine. He’s awesome pretty much all of the time). It’s called Chicago’s River Hotel and it’s a two-room suite with a Queen-sized bed and a sofa bed for the boys. It also includes a kitchenette which will hopefully save us money on food. (At the very least, we can eat breakfast and keep some snack foods on hand).

Here’s a picture of our room: 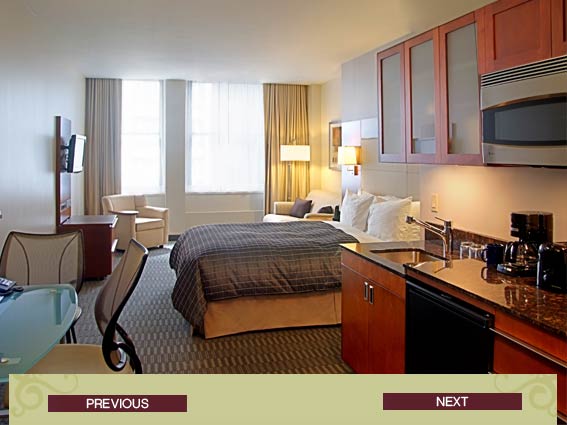 I’m a little worried the sofa bed will be too small for two tall young men, but we’ll likely take the cushions off the sofa/chair and make a bed on the floor for one of the them so they won’t be in each other’s faces all night long.

The hotel is right across the street from the Chicago river and in an area close to pretty much everything. I think we’re going to try and NOT rent a car and use the public transit systems instead. I’ve been looking into Shedd’s Aquarium and the Museum of Science & Industry and we’ll likely spend most of our time at these places. We would also like to go to Navy Pier and Magnificent Mile. We’re only going to be there for three days (2 1/2 when you take into consideration that the train doesn’t actually reach Chicago until about 2ish), and that should be enough time for us to see some fun stuff before boarding the train back to St. Louis.

We’ll be traveling back home on Jazz’s birthday, so we’ll likely treat him to some place nice for dinner that evening.

I asked off for some time in June. I’d like to take a long weekend with Kevin someplace. We haven’t really figured out where we want to go yet, but we have A TON of frequent flyer miles burning a hole in our online account. 🙂

Kevin and I have been married almost 22 years (actually, that’s not funny, that’s UNUSUAL), and we’ve never shared a bathroom.

I mean, we shared a bathroom when we lived in our apartment (this was before we were married *GASP*), and then we moved into a rental house six months after Dude was born. The rental house had two bathrooms – he used one and I used one.

Then we moved into this house, which has two bathrooms; he used one and I used one.

Now that our bathrooms have been remodeled/reconfigured, we both use the master bath and the boys use the guest bathroom. (This is indeed a Freudian message to the boys – you are merely GUESTS in our home. We love you and want you to stay as long as you need to in order to save for your future, but you WILL move out one day, like it or not).

Kevin is having a hard time putting up with my “lady stuff,” mainly because he’s never had to share my lady space before now.

I freely admit, I have a lot of lady stuff, but come on ladies, it takes a small truck load of stuff to make ourselves beautiful/presentable every day, am I right?

Okay fine. It takes ME a small truck load of stuff to make myself beautiful/presentable. Ha!

We’re DONE with the bathroom remodel – sort of. There are still a few tweaks “we” have to work on. For example, there is a spot on the ceiling in the front bathroom that needs touching up. Kevin had to install a door on the back bathroom, (it had one of those accordion-style doors before, which, by the way, we’ve put out by our garage, along with Dude’s old (i.e. childish) head board with big huge FREE signs attached. I wonder if anyone took it yet?) The door is installed, but Kevin needs to finish the trim. After that, I will paint the door. And “we” still need to paint our old bathroom cabinet and put it back into our bathroom (which is a short-term solution until we can find a better-quality cabinet that won’t cost an arm and a leg. Seriously. Have you priced cabinets lately? Holy cow …)

BUT, for the most part, they’re done.

And I will kill my husband if he talks me into any more “big” projects in the next ten years.

Here is a before shot of our front bathroom:

And a before shot of our back bathroom:

We basically flipped the configuration around installing a shower stall in the front bathroom and knocking/building a wall so that the bathtub is now in the back bathroom. My very clever husband planned it out on one of those handy-dandy architecture software programs; our bathroom contractor was very impressed with his plans. (Or so he said, anyway).

I had a BLAST putting the bathrooms back together again. These mosiac globes in the front bathroom are one of my favorite things we added …

These used to be in our front bathroom, now they’re in the back bathroom …

(Note what the pictures say – we both FIRMLY believe in these sayings).

(I had to have that shower curtain hemmed – it was about seven inches too long. In fact, the seamstress said that a lot of people have actually brought in shower curtains to hem).

I pretty much love them now. Why the people who built this house didn’t think to configure the bathrooms like this to begin with is beyond us, but whatever, they’re pretty awesome now. They were expensive, and though Kevin and I argue this point, I think we might have overpaid for what we got, but still, I don’t regret it one minute.

We have done so much to this house … it’s ALMOST where it want it to be.

And that’s a good thing since we plan on living here the rest of our lives.

(PS. I just went outside to see if the headboard and the door were still there – they are. Come on people, FREE STUFF!)

If you would like to read my views on religion and how we got started with the ministry, you can read this.

(Comments have been turned off. The information is here to inform and bless you. God granted you the gift of free will – take it or leave it).