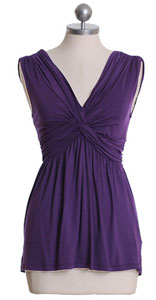 I ordered this top. Cute, right? I received it Friday.

And made the mistake of trying it on.

I love the top, but not necessarily on me.

1. It sits too far out on my shoulders which only makes my wide shoulders look wider. (I could easily have been a line backer in my previous life).

2. Though the color is gorgeous, it looks pretty nasty on my pasty white skin. (But might look better once I start tanning again).

3. The bodice is designed to hug your bosom and define your waist. This would be great, if I knew where my waist was.

4. It’s, in essence, an empire-waist top which I personally LOVE, but Kevin personally HATES. He thinks women who wear these types of tops look pregnant.

I thought about sending it back right away, but then I got to thinking – it’s a summer-type top. I’ll have lost weight and will have a tan by then. And I think it will look pretty hot with a pair of black slacks, heels and silver accessories.

So … I’m holding off until my arms a bit more toned and have some color in them before I send it back. I mean, I have several brightly-colored t-shirts that I can only wear in the summer and ONLY with a tan, so … this might work providing I meet the above conditions.

I haven’t modeled it for Kevin yet. I’m pretty sure he’s going to hate it even under the best of conditions, but still, I’m holding out hope that he won’t be totally turned off by it.

And I thought the whole black slacks/heels/silver jewelry accessory idea would look good for our semi-formal dinner on the cruise.

That we’re planning on taking.

After we visit two of Disney World’s theme parks. (For those of you that voted “Disney World and then a cruise” on my poll the other day. *high five* Do you guys know me or what??)

That’s the real reason I bought this top. Well, that and I thought it might look good to wear to work in the summer, too. (Though I’m not so sure about that one, now that I really think about it).

At any rate, I’m going to hang on to the top and see what it looks like in a few months. If it doesn’t work out, I’ll send it back.

I am in another work out spurt.

Actually, Kevin started it. He’s getting a little, erhm, tummy (which I TOTALLY love honey! I think it’s cute and fun to rub!!) but it’s starting to bother him a little bit so he pulled out his Total Gym (Yes, that’s the one that Chuck Norris and Christie Brinkley advertise. And what? It’s a cool little machine!) yesterday, and worked out while watching Seinfeld, Season 8 (which I watched with him because I don’t think I’ve seen season 8 – how is that possible?!?) and afterward, put in the Wii EA Sports Active disk and did the easy 20 minute workout.

Which got me worked up to try it myself.

So, I got on the treadmill and walked two miles before hitting the EA Sport workout.

I was fine, until those damn lunges.

Those suckers were hard. Mainly because the instructor requires that you hold the lunge. After doing two sets of 20 lunges my legs were jello and would barely support me. I got a little annoyed with the program during the lunges. For some reason, the Wii wouldn’t pick up my motions, so I would lunge, but my avatar would not, so I did several more lunges than was necessary simply because the stupid program couldn’t keep up with me. Also? It kept telling me to slow down. That was also frustrating because I thought the program was too slow.

Also? The running around the track sort of hurt me. I started hurting around the area where my colon was reattached, so I ticked off the program by doing a really slow jog instead. I was totally fine until those runs. (And I wasn’t running full speed ahead, it was really only a brisk jog more than anything).

My favorite part was the boxing part. I LOVED the punches and the Wii controllers did an excellent job keeping up with my punches and jabs.

I also enjoyed using the band for arm exercises, too. They were pretty easy, but I can feel I definitely did some damage today by my soreness level.

I had to pause at the very end because by that time, I’m was getting tired and I over did it. (Which I knew I would – I always do when I get back on an exercise program). In fact, I nearly got sick simply because that was more activity my poor body has seen in quite some time.

But again, that’s pretty normal for me. I guess I don’t classify a workout as a WORKOUT until I make myself nauseous.

At any rate, I liked the EA program overall. I’m looking forward to mastering this easy 20 minute workout and moving onto something a bit more challenging.

In light of what is happening in Egypt right now, I thought this video was pretty timely.

What’s in Your Family Emergency Kit?, posted with vodpod

Here is my video response:

Seriously ya’ll, it’s a good idea to be prepared. You NEVER KNOW what you’ll need, or have to do, to protect your family.

Here are some links you can check out to help you prepare:

Emergency Survival Kit (Again, I don’t want to scare anyone and I’m certainly not one of those people who think the government is all seeing [although …], or wear a tin-foil hat, BUT, again … what if …)

Man. After reading through the above site, I have even more to think about! For example, are you prepared in case of:

I don’t want to scare anyone, but these things should be taken seriously.

Anyway, think about it; talk it over with your family. Get a plan.