Now that’s a loaded title, don’t you think? I can’t claim to KNOW men, but I can claim to UNDERSTAND men – at least, on an elemental level.

I’ve never had very many girlfriends. And this was a conscious decision on my part. Women … irritate me. I can’t handle all of the emotional crap that women put themselves through on a daily basis. I mean, sure, I have emotions too, but I honestly try not to take my emotions out on those around me. (Unless of course that emotion has anything to DO with that person and then watch out, mister).

But I have days when I’m feeling snarky … just because. I could blame it on hormones, and I suppose that that’s true to an extent, but there are days I just feel cranky and everything sets me off. I feel it, I recognize it and I tell my guys, “Hey. I am feeling on edge today so please, don’t push my buttons.” Of course, if they elect to push my buttons *cough*GD*cough*, then they deserve what they get, no?

I’ve learned over the years, and through many, many ugly moments (like nearly getting fired), that it’s not fair to take my bad moods out on those around me. Whether that’s family, friends, co-workers or stupid drivers. It’s MY problem and I’LL deal with it.

I recognize this irrational behavior in myself and it irritates the ever loving crap out of me when I’m around women who DON’T recognize it. I just want to take them by the shoulders, shake them until their teeth rattle and snarl into their face, “Get a hold of yourself, woman!”

Apparently, I have anger issues as well. But that’s another post.

So, I’ve always been one of those females who got along better with the guys than with the girls. Guys are so … different. They’re simple and mellow. They don’t play head games and though they may not tell you how they feel, it’s not hard to figure it out because, well, they’re simple.

And I’m not saying that in a disparaging way, that’s just the way they are programmed.

I knew all of this on a fundamental level growing up but it wasn’t until I took some communication classes in college (not that those classes taught me anything about the opposite sex but rather taught me HOW to communicate on a non-threatening level – which, incidentally, I think everyone should learn), and listened to Dr. Laura that I truly began to understand how men tick.

They are “do” creatures. They are natural problem solvers. So when we feel like whining or just blowing off steam, they feel helpless because they feel a need to “fix” whatever it is that’s bothering us, unless we tell them otherwise. (“I just need to vent. You don’t need to do anything, just listen to me for five minutes, okay?”)

I think taking the initiative to learn more about men has helped my relationship with my husband. I “get” him. I do. I understand his thought process and I have learned, over the years, what irritates him and what pleases him. I can even tell what he’s thinking by his facial expressions and how he’s going to react by his body language. HOW did I learn all of this?

I think women are so self-centered nowadays. It’s all about how SHE feels, or how SHE deals with things. It’s a selfish attitude and one that I think gets women into trouble – a lot.

Look. I realize women have it harder. We are responsible for so many things on both a physical and emotional level. I get that. I live that. But we’re not the tougher sex for no reason – it’s because we can handle it. And we can handle our relationships better if we know where the men are coming from.

It really is true that all we have to do is bat our eyelashes and act all flirty to get our men to do what we want. Take it or lump it, that’s just the way it is.

But they’re also human beings with feelings and they don’t like being treated as if they are stupid or inadequate any less than we do. 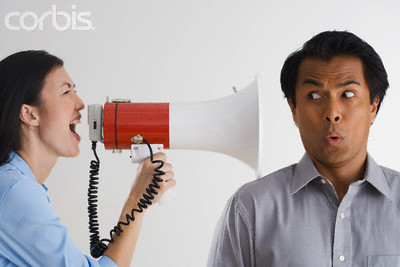 I can’t tell you the number of times I’ve been out shopping and witnessed a woman berating her husband and generally treating him like a child with little to no brain in front of a crowd of people. Poor guy. Perhaps he does deserve to be berated, men aren’t perfect and they can certainly be jerks at times, but NO ONE deserves to be publicly humiliated. If you are honestly having trouble communicating with your spouse, then seek counseling, not a public audience.

How is bursting his eardrum going to help the situation?

And yes, of course I’ve done it. I think all women lose their cool with their boyfriends/husbands out in public at one time or another. It’s frustrating to get them to focus sometimes. But the few times I’ve raised my voice or made angry gestures at my husband in public … well, I paid for it later. He let me know, in no uncertain terms (after we were alone) that he WOULD NOT tolerate being treated like that. Period. And when I stepped back from the situation and looked at it from his point of view, I was ashamed of myself.

No human being should ever be treated like that. He deserves so much better than my bitchy attitude. And I learned a lot about myself after those episodes, too.

Even though I can claim to know my husband, I can’t claim to know all men. Other men have different personalities, different backgrounds, and different emotional issues. And as a result of not knowing these things, I actively pursue the knowledge. I read a ton of relationship articles online. I enjoy reading “men’s” magazines and reading advice columns for men. A lot of times, I’m surprised by the sheer simplicity of the questions and answers – it seems so obvious to us women, but not to these poor guys. They aren’t good at “assuming” things – a lot of times it’s either black or white with them.

They don’t DO the whole reading between the lines thing like we can.

The rationale, or reasons, for doing what they do is just fascinating to me. Sometimes, I find myself rolling my eyes and thinking, “that’s just an excuse to get out of DEALING with [insert issue here].” But other times, I can see where they are coming from. And reading these perspectives helps me for two reasons:

1. It shows me what NOT to do in my own relationship – so, in essence, I learn from their experiences.

2. It gives me an inside look at human nature. Which, in turn, will help me write better stories.

Now before any of you think I approve of men seeking prostitutes or that I think it’s okay for women to turn tricks, I don’t. But it’s reality. And for the most part, it makes me feel sorry for these people who have, for whatever reasons, decided to turn down this path. They’re all seeking something … something they aren’t receiving in their “real” lives. There’s an element missing from their lives and I find that incredibly sad. What a terrible way to live – to feel incomplete in some way and desperate enough to try and find it down this particular dark alley.

So yes, I read about the darker sides of relationships. I do it to learn and observe the male species.

And I’ve learned A LOT.

Hello! My name is Karen and welcome! I’m a mom to two young men – Blake (27) and Brandon (25). I’ve been married to the same wonderful, patient, thoughtful and generous man (Kevin) for 29 years.