Every time we go camping in Branson, we hit one particular bookstore. It used to be called “Foozles”, I can’t remember what it’s called now since it’s been taken over by new management.

We loved this bookstore. Mainly because their prices were cheap. Granted, most of their inventory was old, as in months old, but we didn’t care. We usually walked away with bags of books.

The last few camping trips, with the store under new management, we’ve noticed that this bookstore’s inventory was simply not moving. The same books are still sitting on the dusty shelves and they are a few YEARS old. As in, 2006 guides to Disney World old. Granted, I don’t think tourist’s guides really change all that much from year-to-year, but overall, I don’t think people are interested in spending money on outdated material.

This makes me incredibly sad because you and I both know, this bookstore will likely not survive. Especially now that a big-time “chain” store has been built and is likely luring all of the bookworms away. I always feel so sorry for the smaller “mom and pop” stores. They’re just trying to make a living, too. You know?

But this post isn’t about the demise of our small-time retailers. But rather about the man who had set up a desk by the front entrance of this bookstore and was trying to talk people into buying his book.

Now before you get your fingers in a knot, let me explain. I don’t have a problem with the self-published route, per se …

Well okay, I take that back. I think I do have a problem with being self-published. To me, that’s a cop-out. To me, that’s fooling yourself into thinking that you can actually write and heck, no one else wants your treasure so why not take your sub-par material and force it on the public?

Harsh? Yes. But that’s always my initial reaction to anyone who proudly proclaims they are self-published.

I can UNDERSTAND where these people are coming from. There are a variety of reasons people self-publish their work.

1. They tried the traditional route and were rejected.

2. They don’t care to walk down that traditional route and want to avoid all the BS that comes with traditional publishing and cut out the middle man, so to speak.

3. Even if you went down the traditional publishing route and were lucky enough to be picked up by someone, you are STILL expected to market your own work. You STILL have to do a lot of legwork to get the word out – you might as well do the work yourself and get all the profits, right?

4. They don’t care if their work is widely read to begin with. They are simply interested in seeing their name on a book and if they sell a few hundred copies, well then, great. Life goes on.

I think if I ever went down the self-published route, number 4 is where I’d likely fit.

But then again, some of the crap that the traditional publishing houses choose to print is truly astounding, too. So to be published the traditional way is not just about whether or not you write well, but more about your connections and if you’re a name brand or not. So, just because someone is self-published doesn’t automatically mean their writing is bad, it could just mean their work never made it across the desks of agents/editors who were interested in looking past their self-imposed blinders.

I think that’s my biggest fear when it comes to trying to get anything of mine published – the exposure – the vulnerability. The fear of being told I suck and why am I wasting everyone’s time? 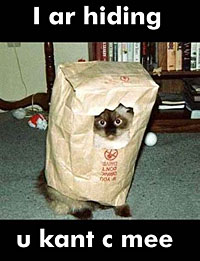 In essence, I’m trying to sugar coat the fact that I’m a chicken at heart to even try.

But not this guy. This guy was proudly standing by his table of books and he was greeting (the few) customers who walked through the bookstore’s doors. And once he greeted people, he went right into his spiel about why they should buy his book.

My heart went out to him. I mean, my heart actually HURT because I could so easily see myself in his shoes, desperately trying to get people interested in my work.

And anyone who knows me KNOWS I’m a LOUSY marketing person. I can’t sell a doorknob to a knob-less door. If I even SUSPECT I’m irritating people with my sales pitch, then I stop and give up.

When I was a teller at the bank and that became part of my job – to try and coax customers into signing up for various programs, etc – I broke out in a cold sweat. I can’t push myself on people! I just can’t! It makes me extremely uncomfortable because you know people are looking at their watches and trying to think of a graceful way to say no. I hate putting myself in that position to begin with – I hate putting other people in that position.

So, the fact that this guy had the balls to step out into public to try and sell his book, well, I admired him. I admired him and I felt sorry for him, especially when people politely shook their heads and walked away without giving the guy’s book a second glance.

I’m just not sure my heart could stand the rejection, quite frankly.

I’m ashamed to admit this, but I skirted past the guy. Luckily, the guy latched onto my husband first, who is probably the nicest guy you’ll ever meet, and he stopped to listen, thereby giving me an opportunity to just sort of blend into the nearest bookshelf.

I watched the guy and my husband talk for a long time. And my heart burst with pride when my husband picked up one of the guy’s books, shook his hand and came over to join me.

He was going to buy the guy’s book.

I was dying to ask him all sorts of questions about the guy and the plot of his book, but the place was deserted and very, very quiet, and I was afraid the writer would hear me talking about him, so I kept my mouth shut.

We bought the guy’s book and left.

But my husband later told me a little bit about the guy’s life and why he chose to self-publish (see above reasons), and about the plot of his book.

And I must admit, I was interested. And my respect for this guy went up about ten notches because it sounded like he was an articulate, intelligent man who was retired and giving the writing gig a shot.

What awesome courage. He didn’t have anything to lose – he was already financially set, he was simply riding the tail of his hobby to see where it might lead him.

My husband read the book. He said that it had quite a few typos and probably needed an editor who knew what he/she was doing (the guy had some of his friends edit it for him – don’t do that – ever), but overall, the story was interesting and kept him interested enough to finish it.

The whole episode has prompted my husband to ride my butt about submitting my own work. And he’s absolutely right, I need to at LEAST TRY. But the thought of me becoming like that man, standing by the door of a dying bookstore and greeting people who come in the door and then starting a cold sales pitch about my book makes me hyperventilate.

And that’s a sobering realization. Because I think that tells me that perhaps I really don’t want to be published all that badly if I’m not willing to put myself out there and take a chance.

Aren’t they cute? This is my mother-in-law (the blonde woman on the right) and my grandmother-in-law doing a little dance and showing off their matching t-shirts. My husband thinks this was taken in 1964 sometime. That means my husband would have been about four at that time.