I love to vlog. I mean, it’s a little uncomfortable at first, but the more you do it, the easier it gets.

The problem is, of course, figuring out just WHAT to vlog about. I’ve started the Wednesday “In My Opinion” nonsense questions just to give me something to work with, but it’s when I see videos like this one that I know that I truly suck at vlogging. LOL.

I’m going to try and video tape more portions of my life. Just little snippets of things I’d like to remember and pass on to future generations.

Here’s such a snippet. It was after the horrific storms passed through on Sunday (the same storm front that produced a tornado and decimated Joplin Missouri) and we saw the BRIGHTEST rainbow I’ve ever seen in my entire life. Kevin is the one who saw it first and then me, Dude and Jazz all came out onto the porch to take a look. You can hear Jazz giving me a hard time in the background and my maniacal laughter in response.

Yeah, that pretty much sums up my relationships with my boys. HA!

Here’s a still shot. I edited the yellow out so you could see the rainbow, but the night was as yellow as you see in the above video. 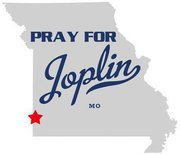 In case you haven’t heard, Joplin, Missouri, which is about 70 miles west of Springfield Missouri, where I live, was decimated by an (experts upgraded) EF5 tornado Sunday evening.

They’re saying that about 30% of the city was wiped out and the latest body count is 123. Numbers keep jumping. 😦

You can see pictures of the disaster in this slideshow.

They’re also saying that it’s “the deadliest single U.S. tornado since modern record-keeping began more than 60 years ago.” We’re no strangers tornadoes down here in The Ozarks. We’ve had several rip through this area over the past decades, but what I think is especially shocking about what happened to Joplin is that so many people died. And many more are missing. There is a Facebook page calling for help in locating a young man, 18 to be exact. He was driving home from his high school graduation with his dad when he was sucked out of the sunroof of their SUV. He suffered a head trauma and was taken to the hospital, but now his family can’t locate him.

There is another Facebook page plea looking for the 15-month old boy shown in the profile picture.

I’m crying as I type this. I CAN NOT imagine the horror of not being able to locate a loved one, let alone a BABY, after a tragedy like this. That would truly be a living nightmare.

People in Joplin are having to paint the house number and the name of the street on the wreckage because everything is so badly destroyed that people can’t tell what streets are what.

And that reminds me of a story I heard on the radio as I was coming home from dropping Jazz off at school this morning. It made me cry.

This man, hearing that a tornado was heading straight for his ex-wife’s house, who had custody of their little girl, broke speed limits to drive to her house to make sure they were okay. He said he drove as close as he was able before being forced to abandon his car and run the rest of the way because there was so much debris and downed power lines that he couldn’t drive on the streets. When he arrived, he said he had trouble locating the house because the entire area was simply gone – he had had to ask people in the area if he was even on the right street because all of the landmarks had disappeared. (Even the trees were debarked and none of them had limbs or leaves, they were simply broken trunks).

When he finally located her house, he said that the only thing left standing was the bathroom and there were pillows in the tub, but he didn’t find his ex-wife or daughter. The roof had collapsed onto the bathroom, which is what apparently saved them from being blown away. The mattress off the bed in the master bedroom, which was next to the bathroom was finally located two blocks away and stuck in a tree.

One of their cars were missing, so the man didn’t know if they had tried to drive off and if so, did they make it, or if the car simply got blown away. (If you look at the pictures, you’ll notice that several cars are totaled – they were tossed around like matchbox cars).

Since the cell phone towers were down, there wasn’t cell phone service, so he spent nearly four hours rummaging through the debris of his ex-wife’s house fearful of what he would find. He finally went over to his ex-wife’s parents’ house and found his ex-wife and his daughter there, safe and sound. He said it was the most terrifying four hours of his entire life.

Again. I can only imagine!! And I hope to NEVER experience that terror first hand.

Rescue workers are still rummaging through the debris looking for more bodies. The count seems to increase a little more with each passing day.

You can watch five videos from the tornado here. Hearing people screaming and crying will give you goosebumps.

I’ve spent the last two days watching, reading and praying for the people in Joplin. I’m also pleased to see that Springfield has been moving full-speed ahead with programs to help the people in need.

Here’s how you can help, if you feel so inclined:

First and foremost, if you want to physically drive to Joplin and help, PLEASE call this number before doing so: 1-800-427-4628, they will tell you where you’re needed and you’ll know where to go before you arrive as opposed to just showing up and not knowing where to go or what to do.

If you want to donate something, here is a list of the top-ten things most needed:

Many of our local schools are hosting programs that you can contribute to.

If you live outside of Joplin, but are in the area, here is a list of outlining towns and what they’re doing to help out.

I know when terrible things happen like this, people are hurt, confused and angry and tend to blame God. Please, PLEASE understand that our God is a kind and loving God and would NEVER hurt us like this. God is NOT the instigator behind evil things like this happening but rather it’s Satan’s fault. Let’s put the blame where it belongs, please. Don’t blame God for tragedies.

Also, I got to thinking about what WE would do if anything this horrific was coming straight toward us and Kevin and I have decided that we would likely leave our house and huddle in our huge storm drain. It’s not the ideal solution, but staying in our house would likely kill us. He suggested the crawl space at first, it’s a huge crawl space, about four feet high, and though it might be a good place to hide, what if the house completely collapses on top of us?? We would be buried alive. *shudder* Since we don’t have a basement and our two bathrooms have windows, our only other options would be a closet or the hallway and neither really gives me any sense of safety.

We wouldn’t run to the storm drain unless we knew FOR CERTAIN that it was heading right toward us and there was no escape. The problem with the storm drain, obviously, is the water. If we get heavy rains, we will likely be hanging on for dear life to avoid being swept by the current, but I still think it’s a safer option than staying in the house.

Especially after seeing what happens to houses that are unfortunate enough to be in the path of an EF4 tornado.

I made a silly little video to give you an idea what I’m talking about. I felt self-conscious out there talking into my camera, wondering if my neighbors think I’m (even more) crazy. I also made a wise crack about my hot pink t-shirt. I’m not a hot pink sort of gal. Not that there’s anything wrong with hot pink – it’s just not a color I wear very often and only when I have a tan. You know, I don’t even know why I mentioned the color of my shirt. Stupid, stupid …

Anyway. This whole disaster has really affected me and it’s been hard to think of little else.

Please help the people in Joplin. Please guide them and help them find the courage they need to survive this tragedy. I pray that the families who are missing loved ones find them, safe and sound, and I pray they are able to rebuild their lives. Please protect them and bless them, in the name of Jesus Christ, Amen.