I gasped when I read about the people being gunned down at the shooting in Arizona on Saturday. I cried when I read that six people had died (including a nine-year girl who had coincidentally been born Sept. 11, 2001 and was there because she was on the student council at her school and was interested in politics) and that Congresswoman Giffords had been shot in the head by a rifle at close range and was listed in critical condition at a nearby hospital.

I honestly can’t comprehend what they must be going through right now.

And then, I made the mistake of getting on Twitter and all I felt was RED HOT RAGE at the assholes who, instead of concentrating on the victims of this crime and trying to learn just what happened and why, spent their energies on pointing fingers and placing blame on political figures and institutions all in the name of personal hatred and progressing political agendas.

I was angry, sickened and discouraged by the public reaction that ERUPTED from this tragedy.

The blame game began before the smoke from the crime scene had even dissipated. Suddenly, it became the conservatives’ fault that this mentally disturbed young man (and he has a record of increasingly alarming activities over the years) went Rambo on a shopping center on a sunny Saturday in Arizona.

It was now Sarah Palin’s fault that this happened because she dared to use the symbol for crosshairs on her map to indicate those were the Democrats to beat in the next elections because they voted against health care reform. (Though some dispute they aren’t crosshairs at all but rather the symbol for surveyors, but that’s splitting hairs). Do I think that was a good idea? Oh hell no. I knew that was a mistake the moment I saw the map – I just KNEW it would be a matter of time before the left tried to twist that imagery around to suit their particular brand of blame game.

I’m not a Sarah Palin fan. I don’t dislike the woman, but I don’t worship her feet, either. I admire her guts for putting herself out there and for not being afraid to say what’s on her mind. Do I think she’s the most eloquent speaker I’ve ever heard? Definitely not. Do I think she’s stupid? No, but I do think she’s impulsive and that sometimes cast her in an iffy light.

And I DEFINITELY don’t understand people’s irrational hatred of the woman. Truly. THAT baffles me.

Other than Palin, the left is now blaming FOX News, Glenn Beck, Sean Hannity, Rush Limbaugh and their strongly-worded rhetoric for this mentally unbalanced individual openly firing on an innocent crowd. Let’s definitely NOT put the blame on the actual person who pulled the trigger – that would be the RATIONAL thing to do.

Look. Do I think the right gets a little carried away with the rhetoric at times? Definitely. Do I think the left-wing media reports speculation more than facts all in the name to rile people up and increase their ratings? Absolutely. But it’s all part of the rhetoric game and I’m most convinced that RATIONAL people, and I’d like to believe that’s 98.2% of the population, see it for what it is, an Ethos game – a trick of the trade to play on people’s emotions and get them fired up about what is happening in our country and to try and persuade people to their side of the fence. But placing blame on these institutions just to further a political agenda when in fact, they are not responsible for what happened is irresponsible and pathetic.

And if we’re perfectly honest, (and I usually am because that’s who I am), we could attribute anything to causing this sort of thing happening. Palin could just has easily placed hearts instead of crosshairs on that map and there would be a mentally unstable person out there that would think, “OH! It’s a message! I’m supposed to locate these people and cut their hearts out! I GET it. *winkwinknudgenudge*.” The bottom line is, we can say and do anything, no matter how innocent the intention, and there would be someone out there that would misconstrue the message and cross that moral line.

They’re called emotionally unstable and they don’t have a political affiliation, they have a mental disease. HUGE difference there.

And before you think I’m trying to justify the right and their rhetoric because I am, after all, a conservative myself, not so fast. There have been COUNTLESS examples of the left doing this very thing in the past. For example, does THIS map look familiar? What about the phrase, “BEHIND ENEMY LINES” construing that fellow Americans that dare to disagree with the left’s agenda are enemies? Or what about this map, along with a complete legend labeling Republicans “targets” – you don’t think THAT might incite violence? That’s blatantly strong rhetoric, don’t you think?

And let’s not forget Obama’s juicy little comments he’s made over the past several years:

Obama: “They Bring a Knife…We Bring a Gun”
Obama to His Followers: “Get in Their Faces!”
Obama on ACORN Mobs: “I don’t want to quell anger. I think people are right to be angry! I’m angry!”
Obama to His Mercenary Army: “Hit Back Twice As Hard”
Obama on the private sector: “We talk to these folks… so I know whose ass to kick.“
Obama to voters: Republican victory would mean “hand-to-hand combat”
Obama to lib supporters: “It’s time to Fight for it.”
Obama to Latino supporters: “Punish your enemies.”
Obama to democrats: “I’m itching for a fight.”

My point is, BOTH sides are guilty of explosive rhetoric. I’m not saying it’s right, and I’m certainly not condoning it’s usage, but it’s part of the game. We could sit here and point fingers and give examples for HOURS, maybe even DAYS, and then … what? Nothing has been solved. Nothing will be done. Two wrongs don’t make a right … and never will. I wish it wasn’t like this. I wish we could sit down and have rational discussions about our political differences and then come to a fair compromise. But it doesn’t work that way. There are too many variables and it’s really up to the people to use their heads and maintain their tempers – otherwise, you have THIS type of thing happening. People diverting blame and fabricating reasons all to further incite people and drive that political wedge.

So I implore you readers, when something like this happens (and unfortunately, it will again because we are a fallen nation full of evil and sin), I hope you will STOP, GET THE FACTS AND THINK before angrily waving your weapons or jumping on a particular bandwagon.

The future of our country honestly depends on people keeping a level head.

Do me a favor, put the blame where the blame BELONGS. Don’t fabricate an enemy – we have enough real-live enemies as it is, we don’t need any more. 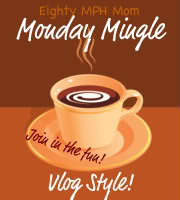 This week’s questions (submitted by Robyn from Robyn’s Online World):
1. Who has the best voice you have ever heard? Or sexiest?
2. Would you rather be smarter, more athletic, or better looking?
3. If you were a doctor, which specialty would you choose?

NEXT WEEK’S QUESTIONS:
1. How do you feel about doing fun challenges for Monday Mingle every once in awhile? Like take a video of yourself trying to blow the shell off of a hardboiled egg (just an example 🙂
2. Who is one of your heroes and why do they inspire you?
3. What was the best TV sitcom ever?