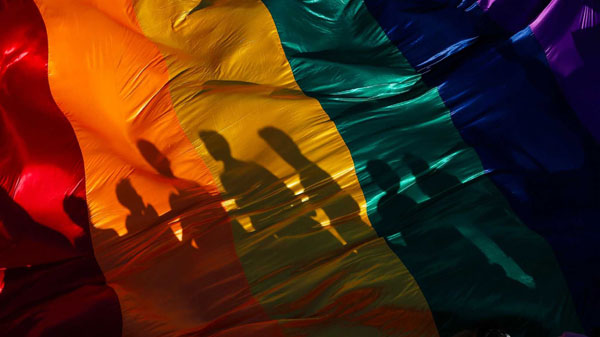 As the transgender movement has developed, so too has its focus on the transitioning of younger and younger people. TransKids, according to the “about” section of the transgender youth website, is “a safe and affirming place where helping your kids live fully and embodied is our only goal.”

TransKids.biz, which is “dedicated to providing young folks with gender expression gear and resources,” not only recommends transgender children’s books like “Who are you? The Kid’s Guide to Gender Identity” and “Be Who You Are,” it markets and sells garments and prosthetics designed to fit young children between the approximate ages of 8-13. [Source]

What the HELL is going on with our children, people?? WHY are we so obsessed with warping our children and making them believe they are someone other than their biological birth? People that are desperate to sell this notion that a boy is not a boy and a girl is not a girl that they are now trying to spoon feed us a product that kids, CHILDREN, can strap on and pretend they are something they are not.

And we wonder why society is so screwed up?!

This is absolute madness to me. For a group of people who loudly proclaim that it’s “science” whenever it comes to climate change on one hand, and then in the very next breathe discount science when it comes to our biological makeup, a GENETIC code that CAN NOT BE CHANGED NO MATTER HOW MUCH WE FORCE HORMONES ON PEOPLE OR STRAP PROSTHETICS TO OUR BODIES, they are wildly inconsistent in their arguments.

How can anyone take them seriously?

I have thoughts on this whole sexual orientation thing. You want to live your life as a gay man, lesbian woman, or any other label you want to dream up, okay. Knock yourself out. I don’t believe in the concept and I certainly don’t think it’s normal or acceptable, but ultimately, who cares what I think. It’s your life. Live it the way you see fit. But don’t expect me to support your choice just as I don’t expect you to support me and my life choices.

Ultimately, people will have to answer for their lives before the judgement chair.

But now that the public has gotten used to people and their screwed up life views and their insistence that there are multiple sexual orientations and that same-sex couples are “normal”, or at the very least commonplace, the attention needs to shift to something more perverse and disturbing because the dust has settled too much, we need more chaos, something new to “fight” about.

Because you see, honestly, people truly don’t care how you live your lives. Most people have ZERO interest in what you do in your bedrooms. Truly. They really, truly don’t care. Contrary to popular belief, the world does not revolve around attention-seeking people that for whatever reason, feel like they have to shove their beliefs down everyone’s throats. Sure, we become complacent after a time but not because we’re accepting these mixed up individuals’ claims but because we’re simply tired of listening to the madness. It does no good to try and talk sense into people like this, they have no desire for honest discourse, they just want to argue and again, justify their warped sense of self. And just as an adult finally throws up his/her hands after listening to an argumentative child for hours on end, rationale adults do the same – fine, have it your way. I’m tired of fighting with you.

I’m not saying this is right, or even acceptable, but it is human nature. I find myself doing the same thing. You can only pound your head against a concrete wall for so long before your notice the cracked skull and the blood dripping down your temples.

I’m not blaming the children, they don’t know better. The adults in their lives, however, DO.

Following the increasing social acceptance of the adult transgender movement in western culture, the focus has begun to shift toward children who express what may appear to be gender dysphoria.

Despite the possibility of irreparable physical and psychological damage to prepubescent children who are given hormone therapy and offered transitional services, there is a small but vocal group of Americans pushing for the unconditional cultural approval of such things.

WHY are we allowing this “small but vocal group of Americans” to suddenly change the natural course of things? And not just in this arena, but overall? Do you know how many times I’ve read articles about a “supposed” injustice started by a small group of individuals that ultimately MAKE the changes they want? Because we give in as a society? Even though the MAJORITY of people have no desire for that change?

WHY DO WE DO THIS? Why do we cave?? Is it because we’re afraid people will call us names? Like racist, homophobic and on and on? If we’re standing up for what we believe is right, and we have a solid argument and proof to back ourselves up, WHO CARES IF SOMEONE CALLS US NAMES. It’s like a schoolyard bully who has no logical reason why he/she is acting that way, it’s just the way he/she FEELS, but when confronted can do nothing but name call and physically intimidate to get the point across.

Feelings are not rational. If we allow ourselves to live our lives based on our feelings well … we get the kind of world we’re living in now. Chaotic and completely upside down.

And yet, the majority of us remain silent. We allow these bullies to push and push until we’re so far gone, we’re not sure who to fight back anymore.

And now, these whacks have turned their attention to our children.

Who will later become adults with this warped-sense of life ingrained into their heads.

When will we stand up, be adults, and simply say, STOP THIS NONSENSE.