The most surprised you’ve ever been.

I don’t like surprises. At least when I’m the recipient. I like being the person surprising someone but don’t surprise me.

I like control. I feel comfortable when I’m in control.

Though I know filling in for each other at work WILL happen, I work with nine doctors after all, I HATE it when I’m asked to fill in at the last minute. I absolutely don’t mind if I’m given a head’s up and I can prepare, but to walk in and someone say, “Oh hey, Karen, I need you to fill in for so-and-so” makes my butt cheeks clinch.

So to surprise me and I receive it well, is rare.

It has happened before. When Kevin and I lived in our rental house, shortly after we got married, when Blake was a baby and I believe it was around Christmas time, I walked into the spare bedroom to get something and then came back out to talk to Kevin.

“Did you notice anything unusual?” Kevin asked.

So I followed Kevin back into the bedroom. “What do you see?”

I looked around and shrugged. “Nothing.”

He nodded toward a huge lump of something covered by a blanket.

I blinked and am embarrassed to say it really didn’t register for a few seconds. Then I gasped, lifted the blanket off and saw it.

It was a curio case to put all of my Previous Moment figurines in.

(Because back then, I collected them. I know. I KNOW) 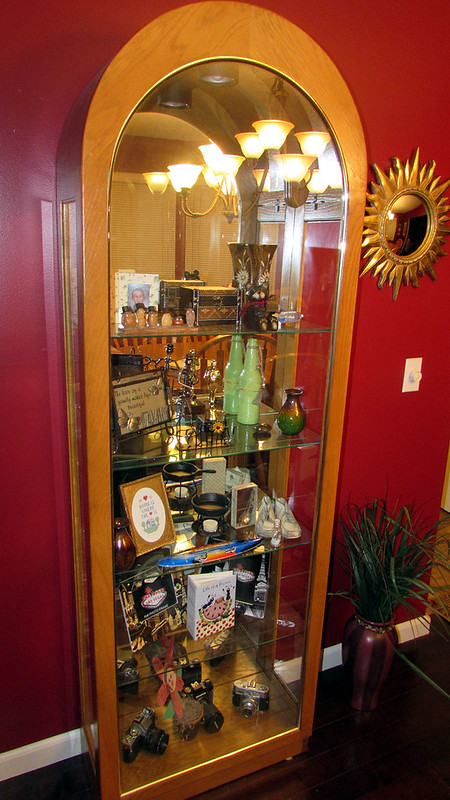 I just have knick knacks in there now, no Previous Moments (though I still have most of them and I bet they’re worth some money today) but it’s the same case. I LOVE my case. It fits my personality, I think. Sleek and sexy.

(Why are you laughing??)

I had no idea Kevin was even THINKING about buying me a curio case. I had never mentioned wanting one and until he bought me one, I didn’t even know I WANTED one. But that is one time that will always stick out in my mind because because he truly took me by surprise.