I hesitate to write this post. I don’t want you to get the wrong idea about the medical field, or more specifically, neurosurgery, but I feel I must talk about this because it HAUNTS me.

I don’t know if anyone outside of Texas would really know about this case. I certainly never heard of it until my PA started talking about the podcast and how we MUST listen to it. (Actually, my doctor might have been the one to bring it to my PA’s attention, I’m not sure).

The name of the podcast? Dr. Death.

It’s a true-life horror story of Christopher Duntsch, a neurosurgeon who maimed, and in two cases, killed, over 30 people in a two-year span.

We’re at our most vulnerable when we go to our doctors. We trust the person at the other end of that scalpel. We trust the hospital. We trust the system. Dr. Christopher Duntsch was a neurosurgeon who radiated confidence. He claimed he was the best in Dallas. If you had back pain, and had tried everything else, Dr. Duntsch could give you the spine surgery that would take your pain away. But soon his patients started to experience complications. And all they had to protect them was a system ill equipped to stop the madness. From Wondery, the network behind the hit podcast Dirty John, DR. DEATH is about a medical system that failed to protect these patients at every possible turn. Reported and hosted by Laura Beil.

In case you’re not aware, I am a medical assistant that works in a neurosurgery clinic. We have nine surgeons in our practice, eight neurosurgeons and an interventional neuro radiologist (he specializes in aneurysms). I’m very blessed to work with some of the best doctors in the country, in my opinion. They are all awesome and they are all excellent surgeons.

So, listening to this podcast REALLY hit home for me. Too close to home. I feel like it’s changed my perspective in regards to my job, the doctors I work with and the medical field as a whole. I frequently got goosebumps listening to what this crazy man did to people.

But it’s almost more alarming that he didn’t stop even after being confronted with the results, he refused to accept the reality that he was hurting people, and that he was allowed to continue to maim people.

In a nutshell, this man graduated from med school in neurosurgery. In addition, he had a PhD in research developing some serum that would regenerate cells in the spine and in essence, make spine surgery unnecessary in some cases.

There’s no question he was smart. You would have to be to graduate from medical school and become a spine surgeon.

However, he reportedly became addicted to drugs and there was a witness account of how he would be up all night partying, then put his lab coat on and go to to work the next day.

And this was during his residency.

“Over the course of two years, Christopher Duntsch a.k.a. Dr. Death operated on 38 patients in the Dallas area. Of those 38, 31 were left paralyzed or seriously injured and two of them died from surgical complications.”

One of those patients? Was his best friend Jerry Summers.

Mr. Summers had neck surgery. Duntsch botched his surgery so badly not only is he a quadriplegic today, but Duntsch nearly decapitated him due to drilling out nearly all of one vertebrae.

He placed screws into muscle. He drilled “ping-pong” sized holes in vertebrae. He completely destroyed nerve endings. He killed one side of the thyroid in one patient and I believe put a hole in the same patient’s esophagus.

Listening to this story made me physically sick.

How can a person purposefully do these things to other humans? How does a person not SEE what he’s done and STILL continue to operate as if nothing is wrong?

The man is pure evil.

In the case of Mary Efurd, she was on the operating table when his previous patient was hemorrhaging, BROKE SCRUB, which means, he left the operating room and compromised the sterile environment and the patient’s back was still open with her spine exposed, to argue with the hospital administration to allow him to operate, once again, on the dying woman because he was convinced he could fix her.

One of his patients came in for a follow up and when Duntsch looked at the patient’s scans, he noted a foreign object was in her spine. That turned out to be a sponge he left in the patient.

He diagnosed another patient with a malignant tissue and that turned out to be the patient’s normal muscle tissue.

It just goes on and on. And the whole time I’m just sitting there, flabbergasted, that 1. he continued to do surgeries even though he KNEW he harmed other patients so that to me means he was intentionally doing it, 2. that the operating staff allowed it to happen, though there is a story of one resident surgeon physically putting his hands over Duntsch and telling him to stop, he was dangerous and he wouldn’t work with him ever again, 3. that someone didn’t report him to the medical board, it took getting the police involved before he was stopped.

It’s so disturbing on so many levels. Are doctors really that untouchable??

Listening to this real-life horror story has really changed my perspective at work. I think I take my job even more seriously now and it awes me that so many people put so much trust in my doctor and his team. It’s humbling, quite honestly.

I can’t imagine the pressure that realization is to doctors.

And it concerns me that there doesn’t seem to be a checks/balances process in place for a situation like this. Granted, this was a one-of-kind tragedy and I pray nothing like this ever happens again, but how effective is the disciplinary actions for when something doesn’t go right?

I also put myself in the shoes of his office manager and the nurses that worked with him in his clinic. How could you ethically work with a monster like this? I know his office manager did end up quitting and telling anyone who would listen what was going on, but still, IMAGINE THE STRESS AND THE GUILT OF IT ALL.

And how must Duntsch’s parents feel when they found out what their son had done to people? I truly can’t fathom it.

It’s a shocking story but one we can learn from, I think.

What is your favorite work of art? What do you love about it?

I’m not really into art. I appreciate art, but it’s not something I seek out or take an interest in.

The art that really captures my attention, are landscapes, or moments in time, or beauty, like a vase of flowers, something that evokes an emotion in me.

Which I get is the objective of art as a whole.

But something recognizable, a person, a place, something tangible and beautiful.

I can’t STAND abstract art. To me, it looks like something a child drew and it’s chaotic and mindless. No thanks.

For example, I love my aunt/uncle’s Etsy shop. I love the art he creates using steel. He’s a welder by trade and he figured how to utilize his unique gifts to offer something beautiful to people.

And my mom’s crafts. She’s been making beautiful things all her life.

The only “art” I feel I have is writing, and that might be debatable with some people.

My husband’s art is finding old/broken things and turning them into something functional and/or decorative. Kevin also painted this: 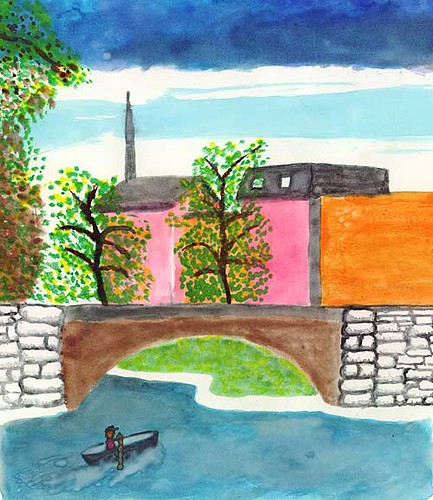 This is also my favorite piece of art we have in our home: