Jazz with his medal he earned with the band at the 2012 Renegade Review in Tulsa this past October.

The weather was awful that day – cold and rainy. Luckily, our kids were able to perform without getting rained on – there were two bands, when we were there, that weren’t so lucky. I felt so sorry for them.

We got through prelims, went out to dinner, and checked Twitter to see if the band director had posted the times our kids would be performing in finals.

They wouldn’t be performing – finals had been canceled because a wicked storm was coming in. (A storm that we drove three hours back home in – my fingers were sore from gripping the steering wheel so hard).

So … the kids didn’t get to perform. And they were all really disappointed. However, the officials tallied up the scores and our kids came in second overall. Jazz came home from school one day and proudly showed us his medal.

This medal made all of his hard work totally worth it.

And I was thrilled that the kids actually had something they could keep and remember the experience by.

The orthodox definition of the Trinity is:

A “three-fold personality existing in one divine being or substance; the union in one God of Father, Son, and Holy Spirit as three infinite, co-equal, co-eternal persons; one God in three persons.”

“God the Father, God the Son, and God the Holy Spirit all of which make up our ONE true God.”

Since its components began to be officially codified at the Council of Nicea in 325 AD, the “Trinity” has been a topic that has caused great confusion and uncertainty for many truth-seeking Christians. This 16 hour seminar, by Don Snedeker, is filled with fascinating quotes from many Christians through the centuries who recognized that the Trinity has no biblical basis, and who stood firm against opposition and persecution for not believing it. Don aptly shows how critical it is for Christians to truly understand who Jesus Christ really is and what is his relationship to God, not only so they can make a rational defense of our faith, but so they can experience a relationship with God similar to that which Jesus had.

Looking out of our hotel window in Vancouver Canada.

So. I have the attention span of a flea anymore – especially on week nights when I’ve been staring intently [INTENTLY] at a computer monitor for eight hours. The thought of getting back on the computer when I get home makes me want to scratch my eyes out.

But I still haven’t written about our vacation TWO MONTHS AGO, and Jazz’s marching band season so … bear with me. I’ll get to it. But it’s going to take a while – I’ll write when I can, and IF I can. (See the scratch my eyes out paragraph).

When we started planning our vacation for the year (we have sort of made a pact to take a cruise/trip somewhere at least once a year – because life is too short to be all work and no play), we knew we wanted something short – not a whole week because we didn’t want to leave the boys alone at home for too long. And we wanted to go someplace different – the west coast sounded good. We hadn’t been to the west coast since I was four-months pregnant with Dude – TWENTY YEARS ago.

We opted for Holland America cruise lines this go around because we hadn’t sailed with them before and we were getting a little burnt out with Carnival Cruise Lines. Not that Carnival isn’t great, it is, but we wanted something a little more “sophisticated” (i.e., a line that likely wouldn’t have as many children on board).

We picked a cruise that sailed out of Vancouver Canada.

We used our frequent flyers miles, which meant we could, and did, fly out of Springfield. We flew to Dallas, then caught a bigger plane to Vancouver – a four-hour flight. With Internet. SWEET. The flight went like clock-work and we arrived in Vancouver, Canada with nary a hitch. We sailed through customs. We hailed a taxi and made it to our hotel in record time (though I did get a bit car sick – it was stop/go/stop/go process the whole way).

The day was overcast and a bit rainy, but it wasn’t too bad.

We loved Vancouver immediately. And since we were only there for one night in order to catch our boat out the next day, we started planning another trip back again so we would have more time to explore.

We plan on going back in August/September next year. 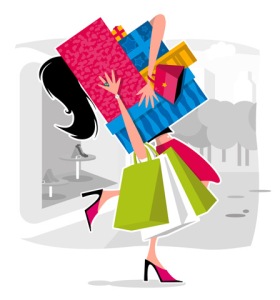 I’m sort of glad to be back at work because WOW, I spent a ton of money this past weekend.

I haunted several online sites and pretty much took care of all of my Christmas shopping by taking advantage of sales and coupons.

I love it when I find “deals” on things I would have bought anyway.

So yeah. The boys are done, Kevin is done(ish) and I even have the stocking stuffers, save for the candy, which I’ll buy a little at a time over the next few weeks.

The boys didn’t really want that much this year. And I’ve reached the point where I’m not really sure what to buy them since they’re young men now and are getting too old for “toys”, per se.

But, Christmas wouldn’t be fun without a toy here and there, so I did end up getting the boys a PS3 game, and a controller. The game is co-op, which means they can play together, as a team, and you can never have too much together time, right??

The other game is a DS game, and they can share that one, too.

Jazz wants money to put on his Steam account so he can buy more computer games (shock) and Dude … well, he didn’t really give me very many ideas, so I ended up buying him several nice shirts to wear to Kevin’s office since he’s now “technically” employed there. The guys are supposed to fill out an I9 and other forms today. Dude is filling out all of the paperwork that he would with any other employer and Kevin will be taking out federal, state, Social Security taxes as well.

That should be a real eye opener for Dude.

But. This means the boy will be making some boo-coo bucks in the coming weeks and he’ll be making enough on his own to buy the computer upgrades that he’s wanting to make, so, I’m sort of thinking of things to give him that he wouldn’t normally buy on his own.

I don’t know if I’ve mentioned or not, but Kevin gave me an HTC Android phone for my birthday. I had been fighting the upgrade for YEARS because I know me, I get obsessed over new toys like that. And this is no exception. I LOVE THIS PHONE!!! It’s soooo cool. I can watch movies, make a voice recording, make a video, use it as an iPod (which I transferred all of the music that I could to my phone over the weekend, but alas, there are quite a few songs that I bought through iTunes that won’t transfer because of the funky format, so I’m not too happy about losing all of the money I spent on those songs. I did download Amazon Cloud, which stores all of my music on their servers, so even if I change phones or want to put my music on another device, it will allow me to do that. That’s the biggest reason I dislike Apple products – they’re control freaks. Either use their products or screw you), and so, so much more. There are apps for everything and I’m having a BLAST playing around with them.

Anyway. Kevin noticed that my phone was on sale on Virgin Mobile’s website, like $150 LESS than what he paid for mine and since the boys routinely complain about their phones being crappy, we thought, WHY NOT?!? The deal was too good to pass up – so they’re both getting HTC phones for Christmas.

We’re going to pay Dude’s monthly fee for six months, and then he’ll be responsible for taking it over after that – if he chooses to. We’ll pay for Jazz’s until he gets his job, and then he can pay for himself.

I’m excited for them. There are so many game apps, it will blow their minds. I’m confident they will become as obsessed as I’ve become.

(Comments have been turned off. The information is here to inform and bless you).