Everything’s fine. I just haven’t felt like writing anything.

And then when I am in the mood to write something, everything seems so trivial and trite when compared to what’s happening in Japan right now. 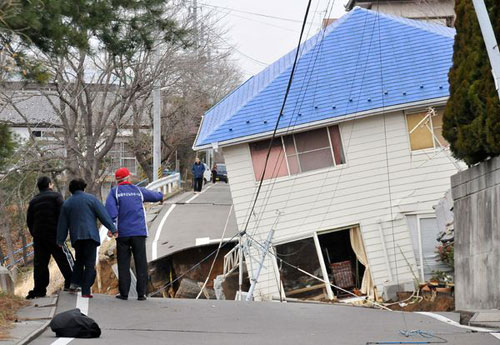 Hasn’t this disaster in Japan been something else?? First, the biggest earthquake to hit their region, EVER, happens. Then a tsunami destroys already weakened structures and sweeps everything in its path out of the way, then they have to battle their nuclear plants and exposed fuel rods … I just pray they get everything under control and no one gets radiation poisoning.

They (who exactly is “they”. The mass majority? The news media? If it’s the news media, I take it with a grain of salt) say this is the worst disaster to hit Japan since WWII.

“They” also say that 1,900 have been found dead, and THOUSANDS are still missing. Holy smokes. Can you imagine trying to find your family in that mess!?!? I’d be FRANTIC.

I read this morning that the funeral parlors just can’t keep up. They only have the capacity to cremate 18 people a day. They’re also out of body bags and coffins and other parlors in the region are sending them both in an attempt to help them out.

This is the stuff of nightmares. Truly.

The pictures … oh Lord, the pictures that are coming in – people crying, their tortured expressions, the sheer devastation around them. It’s all so heart breaking. I just can’t imagine what they’re going through. I pray God we, the United States, never have to endure something so horrific.

For that’s what it is, horrific. There’s really no better word for what is happening over there right now.

When this first happened, my thoughts immediately went to a friend of mine who lives in Japan. Her husband is in the Marines and he’s stationed over there. She has two small boys. Thankfully, she’s far enough away from the mainland that she wasn’t affected and she posted on Facebook that she and her family were okay. I wonder about the radiation, though. If they can’t contain it, then “they” say that the radiation waves could travel as far as Hawaii.

I have a niece who lives in Hawaii.

Times like these, I feel so helpless. I know everyone does. It’s one small comfort to donate funds to the Red Cross so they may help the Japanese, but then what? We all sit idly by and watch in horror as thousands of people’s lives are destroyed.

It’s a very humbling and terribly devastating thing to watch.

Kevin emailed me a link to this video this morning. This guy, out walking his dog (I’m assuming, since the dog in the background won’t shush, but it’s probably just as freaked out as everyone else is by what’s happening), records the quake’s effects on the land around him. It’s pretty amazing to watch the land move back and forth.

(RSS readers – you’ll have to click over to watch the video).

I’ve been scrolling through pictures of the tragedy … they’re just heartbreaking. Especially the ones where people are running their fingers down a list of survivors to see if loved ones made the list. Ugh! That just rips my heart in two. Can you IMAGINE that feeling? And then NOT finding your loved one listed??

This whole thing just boggles my mind. It’s truly all I can think about.

If you would like to help Japan by sending cash donations:

(“Bear in mind, it is extremely difficult and expensive to ship in-kind donations overseas…It is more efficient for disaster relief agencies to purchase needed resources locally for immediate distribution within the disaster area.”)

The Salvation Army has four ways you can help:

Lady GaGa (I know, talk about a weird source, but it’s admirable that she’s doing this), designed a unique wristband that you can purchase for $5.00; the proceeds go to aid Japan. (You can donate more than $5.00 if you wish).

Here’s where you can go to help animals in Japan.

Save the Children Foundation

Add a donation bar to your website (I’ll have to see if I can do something like this for the school websites I maintain).

If you have loved ones in Japan, Google has launched Person Finder.

Save the Children is moving quickly to address the situation there. Donations to its Children’s Emergency Fund will support this effort. To text your donation to Save the Children, text “JAPAN” or “TSUNAMI” to 20222 to donate $10.

And of course, you can donate to the Red Cross here or by texting REDCROSS to 90999 to donate $10.00 from your phone

To help you make the most of your charitable donation, charity watchdog Charity Navigator has published donating tips and a list of charities responding. It will continue to update that list as the group learns of more charities assisting with the relief efforts.

* #Jishin: focuses around general earthquake information
* #Anpi: a hashtag for the confirmation of the safety of individuals or places
* #Hinan: Evacuation information
* #311care: a hashtag regarding medical information for the victims
* #PrayforJapan: A general hashtag for support and best wishes for victims of the crisis

And please, don’t blame God for what happened to Japan. God is light; in Him there is no darkness at all. (I John 1:5): It’s not His fault.

UPDATED: Just read an interesting article about the nuclear plants in Japan. Apparently, “they” say that a meltdown in Japan would be as bad as Chernobyl, however, an article in the Wall Street Journal today says it won’t get to that point. Though this man may be sugar coating the truth, I think my overall point is this: take what you read about the Japan nuclear plants, from whatever source, with a grain of salt. These “reports” are likely dramatized in order to sell more copies.

UPDATED II: Here is a link to some before and after pictures.