My brain is fried.

My brain is more fried than usual.

I have so much swirling in my head that it’s hard to keep it all straight. So … I’ll just start talking and leave it up to you to sort it out.

I drove Kevin to his last physical therapy session today.

He told me later that he was going to miss these sessions. He really feels like they’ve helped him (and I concur) with his recovery process.

Plus, he’s the sole focus for an entire hour and he enjoys the attention.

Apparently, I’m not giving him enough attention at home.

The PT really ran him through the wringer today. He had Kevin do all sorts of stretching and rolling exercises as well as walking up an incline and stairs. Though he aced most everything that was thrown at him, he did find a few positions that he wasn’t able to perform very well. He’ll be working on those a lot in the coming weeks.

We do not have any more physical therapy sessions scheduled. He’s supposed to go see his bone doctor July 27th and we’ll find out whether he recommends any more therapy. Kev’s PT said he was going to recommend that he continue the sessions to his doctor – he feels like there is still a lot of work to do and again, I have to concur. Even though Kevin has been making remarkable progress, there are still quite a few things that he can’t do comfortably, or at all.

Our air conditioner is acting wonky. It barely cools (though to be fair, it does fine as long as the temps don’t go over 90 degrees) and it’s not pulling the humidity out of the air.

So, it’s like breathing underwater in my house right now.

Not fun. And not comfortable.

We’ve already spent too much money on this heap o’ junk this summer, we’re loathe to spend more. Kevin thinks it needs to be cleaned out but he’s incapacitated and he can’t get to it. This of course, frustrates him to no end and he gets cranky, which in turn, makes me defensive and cranky and well … we end up walking on eggshells for a few days.

He needs to crawl under the house to check the pipe thing-a-ma-jig and check to see if the coils blah-blah-blah. I don’t know, he loses me after “coil.” And though I’ve offered to be his legs for him (even though I’d rather have my left arm cut off [and I say left because I’m a leftie] than crawl under the house, where it’s dark, damp and full of creepy, crawly things and *SHUDDER*), Kevin declined my offer. Actually, he snorted, rolled his eyes and THEN declined.

Hey! I can’t help being a GIRL. Dark, damp, creepy places give me the whillies, sue me.

Anyway, we’ll likely ride the rest of this season out (thank God for ceiling fans and box fans) and then concentrate on giving it a good overhaul later when Kevin can get around.

(Again, I offered to help!! Don’t you dare suggest that I didn’t. I’ve actually been forced to step out of my comfort zone several times these past months so … there).

We were on our way to lunch yesterday when I stopped next to the mailbox so Kevin could get the mail. And in that pile of mail, I received an envelope. (I never get mail).

Since I was driving, Kevin opened it for me.

It was a thank you card from one of the schools I volunteer for. Well, I actually maintain their school website for free (long story). They were writing to thank me (once again!) for taking care of their website and how proud they were of it and how often they hear from happy parents praising them for keeping it up-to-date.

In addition to their kind words, they sent me two gift cards – one to Panera Bread and one to Barnes and Noble.

Only two of my favorite places on this planet!!

I thought that was so sweet that I had tears in my eyes. Even though I do their website as my way of giving back to the community and I in no way expect, or want, any payment from them in any way, I have to be honest – it was really nice to be acknowledged and thanked. It really meant a lot to me that they took the time to do that for me.

It’s nice to be singled out and thanked once in a while.

But only once in a while. Too much of that and I get embarrassed.

So, thank YOU for making my day. 🙂

The car, (which we’ve dubbed the BOYS’ car because our oldest son, Dude, could care less about it and hey, if he doesn’t care about it then we’ll just call it the EXTRA car instead of HIS car and allow BOTH boys to use it whenever they need to drive themselves somewhere), is dead.

It’s a ’99 Chevy Cavalier and the thing simply won’t start. It cranks over, but it won’t catch. And when you turn the key, every single light on the dashboard lights up, flickers, dies and then alternates with the other lights so it’s like watching lights on a Christmas tree blink on and off. In addition, it makes a funny high-pitched buzzing noise.

This is how I discovered that something was wrong with it: via text from my oldest son.

I was at the library, on the other side of town, killing time while waiting for Kevin to finish his band practice, when I got a text from Dude. I had asked him to go pick Jazz up from band camp because I didn’t want to drive all the way across town to get him when Dude was closer and hello, the boy wasn’t doing anything anyway and it wouldn’t kill him to help his mama out.

I always POUND into the boys’ heads that when they are out driving (well, Jazz isn’t driving yet, but when he gets to that point), to pleasepleaseplease call or text me to let me know that they’ve arrived at their destination safely and/or arrived home safely. That way, my imagination doesn’t go into overdrive, I don’t freak myself out and go on a rampage and my head doesn’t explode.

And that’s what Dude did (because he’s a good kid, er, man).

“We’re home, but something is wrong with the car.”

That was the text I got. Thank God he had put in the “we’re home” part first or my heart would have stopped, I’m sure.

He said that when he got to the school parking lot, turned the car off so he could open the trunk so Jazz could put his saxophone in (you have to turn the car off and take key out of the ignition and pop the trunk using the remote [what kind of asinine design is that??] And if there’s some sort of trunk pop button in his car, none of us have found it yet), it wouldn’t start back up. He had to try three different times before it finally turned over.

Which is actually pretty weird because when Kevin and I went out the next morning, we couldn’t get it to start at all. So it’s sort of amazing that the boys were able to get it home before it conked all the way out. (Think God was watching over my babies? I do).

We have AAA. So, we called them yesterday and they came out and towed it to a garage for us.

We heard from the mechanic today.

The ignition is shot. They have to get the part from the dealer, reprogram the computer and then get a new set of keys for it.

And this is BEFORE labor.

Can you guess how much it’s going to cost?

Kevin and I debated on whether we wanted to spend that kind of money on this 11-year old car.

I thought we should just sell it for scraps.

Kevin wanted to pay the money. He loves that car. It’s cool. (And it is, I must admit).

So, we’re paying the bill and getting the heap of junk fixed. It’s supposed to be ready tomorrow, just in time for the boys to drive out to their cousins’ house. Which is about 30 minutes from our house.

“Do you trust the car to take them all the way out there?” I asked Kevin.

He shrugged. “Well, if it breaks down, I guess they’ll get some experience with dealing with an old car.”

I mean really, who HASN’T held their breath and prayed their car wouldn’t break down at some point in their life? Who are we to deprive the boys of that experience??

Vacation. It’s coming. As in next week. The big question is: cane or walker – walker or cane?

My mom crochets toys to enter in the fair and then donates them to a children’s charity afterward: 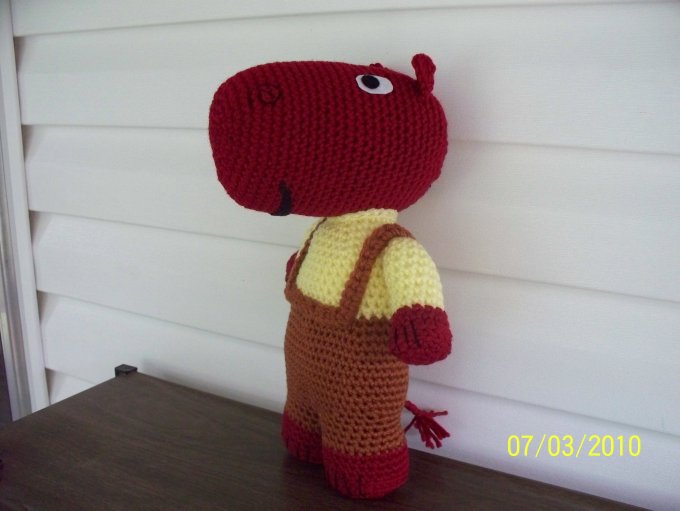 I think that’s just about the coolest thing ever.

(Check out the back – his suspenders criss-cross. Too cute!)