As some of you know, I don’t watch TV. In fact, I RARELY watch TV (though I have gotten into the habit of watching “The O’Reilly Factor” every night. WAIT! Come back! Don’t judge me on the fact that I like Fox News!).

But I do watch a lot of DVD’s.

Because I figure, hey, why not throw in a little exercise with my brainless activity?

I watch a lot of movies this way and without Kevin. My husband doesn’t have a lot of patience for most movies and prefers documentaries which … *YAWN*. So, watching movies on the treadmill works great for me.

I’d like to start keeping track of some of these movies. Mainly because I forget what I’ve watched and tend to rent them again (why yes, I AM that lame). But also because a lot of times, there was an aspect of the movie that struck a chord with me and I’d like to remember it for future reference.

You know, in case I ever get the urge to write a story based on that premise. (Said with some sarcasm because *snort* like that ever happens). 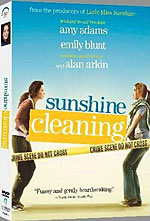 The biggest reason this movie appealed to me was because Amy Adams was in it. I loved her in “Enchanted” and just think she’s the cutest little actress.

And though I wasn’t expecting her to BE that character from “Enchanted,” I was still shocked – this was definitely a vastly different role for her.

I rarely agree with what critics say – and I mean rarely, but there was one observation that I thought summed the movie up perfectly, “Funny and gently heartbreaking.” Says Vanity Fair.

And that’s exactly what it was.

The premise behind the movie is Amy’s character, Rose, is a single mom trying to make ends meet. She works as a maid and though it doesn’t make her a lot of money and she doesn’t exactly enjoy it, she’s good at it.

The father of her son, an old high-school flame, is a cop and suggests she get into the cleaning up after a crime scene business. He convinces her she could make a lot more money doing it and it’s not much different than what she’s currently doing. Not to mention, not a lot of people have the stomach for it, so she could probably always find work.

So, Rose talks her sister, Norah, into starting the business with her. The girls are pretty amusing when they first start out because they have no idea what they’re doing and they walk into some pretty grisly scenes. But after a while, they get the hang of it and Rose discovers that she actually likes doing it. Not because of WHAT she does, but for what she CONTRIBUTES to the situation — She helps people physically move past their personal tragedies.

In addition to the job, Rose is forced to deal with her past — with the father of her child, with her father, with her emotionally-messed up sister, and with her old high school “friends.” She’s a woman who is stuck between wanting to live her life and not being able to let go of her past.

I think the biggest message behind this movie was the fact that though it’s important to address the past, it’s equally important not to LIVE in the past. And that it’s okay to like off-the-wall people and things because life is not about trying to assimilate and blend in, but to embrace the differences.

If you’ve seen “Sunshine Cleaning,” what did you think about of it?