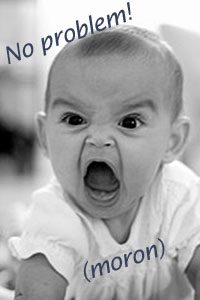 I have a problem.

Personally, I think it’s just another attempt to justify the fact that no one bothers, or even gives a rip, about manners anymore.

It’s the whole saying “no problem” instead of the traditional “you’re welcome” thing.

Let me give you a fictional scenario:

Lori walked into the store and headed straight for the toilet paper section. She didn’t really want to just buy toilet paper, but she was in a hurry. Her son was actually IN the bathroom at home, on the toilet, waiting for toilet paper.

This was no time to get all self-conscious. In fact, some would say this was a downright emergency.

She quickly walked to the aisle and scanned the available products. So many to choose from! She lightly tapped her finger against her lips as she searched for her favorite brand.

Success! She found it. Only, it was on the top shelf and there was no way she her 5’2 frame would be tall enough to reach it.

She could buy another brand, but the last time she did that, she had had to endure cranky children and a complaining husband because the only brand that doesn’t scratch her delicate family was the brand now located on the top shelf and out of reach.

She flagged an associate down.

“Excuse me,” she began but abruptly paused as the sales associate stopped what he was doing to heave a heavy, and very put out sigh.

“I was wondering if you could get my favorite brand of toilet paper from the top shelf?” Her mouth curved into what she hoped was a beguiling smile but given her naked face and disheveled attire (she left the house in quite a hurry when she discovered her son had gone number two and there wasn’t a square to spare in the house), she hoped her charming personality would win her the favor.

The boy sucked the blade of his exact-o knife back into the casing and turned to face her. “Which one did you want?”

She blinked at the hostility in his eyes. Normally, his grumpy demeanor would be enough to scare her off her objective but she had a little boy stuck on the pot at home and she went into mom drive. Her lower lip began to quiver at his rudeness though, but she was determined not to leave the store without the brand of toilet paper she needed; he would just have to be irritated with her.

This was an emergency, after all.

The boy mumbled under his breath while he grabbed a nearby step ladder.

(If she had been thinking clearly, she would have simply used the ladder herself and to hell with the boy).

He stepped up onto the ladder and reaching up, he easily extracted the package of toilet paper. He didn’t exactly throw it at her, but it did slip out of his hands and plop rather heavily into her arms.

“Oh, thank you. Thank you very much. I really appreciate your help. Thanks again.”

The boy gave her a bored look and with a simple shrug, muttered, “no problem.”

Now granted, this scenario is exaggerated (but only just), and there are a lot of people who SAY “no problem” and don’t mean it in a rude way, but to me, it doesn’t matter how it’s said, or what sort of expression accompanies it — it’s rude.

Whatever happened to “you’re welcome?”

Whenever someone responds to a heartfelt “thank you” with a “no problem” I can feel the fine hairs on the back of my neck stand on end.

To me, when someone says “no problem,” what they’re really saying is, “hey, I didn’t really have a choice, I HAD to help you. I’m not doing it out of the kindness of my heart but because I value my job and I don’t want to get fired.”

It’s a dismissal. It’s a write-off. It’s just one word shy of “moron.”

“No problem, moron. Now get lost.”

Now, when someone says, “you’re welcome,” to me, this says, “I’m glad to help! It’s been my pleasure to make your life a little easier! I take great pride in helping people in need. I have absolutely no problem in putting my life on hold to help a fellow being out.”

It’s an embrace. A deep-seated sincerity.

I know. POLITE is a word that is rarely discussed anymore. In fact, I heard a rumor that the Merriam Webster Dictionary folks were thinking about striking the word from the dictionary because no one even knows what it means anymore.

Yes of course I’m making a big deal out of this. And no, of course it doesn’t REALLY bother me that much, but I suppose I’m trying to make a point here — slang or no, I think “no problem” sends the wrong message to our young people. I think we need to consciously make an effort to stay away from these apathetic expressions and concentrate on exercising good old-fashioned manners.

Not only in our language, but in dealing with each other, too.

2 thoughts on “No Problem”