Yay! Another fun meme! I thought I would throw my blog into the mix and join the gang this Friday. In fact, this meme just SCREAMS me because of the sheer randomness – it’s a thing of beauty, ya’ll. *grin*

This Seven Quick Takes on Friday is brought to you by Conversion Diary. Hi Jennifer! It’s nice to meet you! *waves*

We had a little drama around here yesterday. Well, it’s a tragedy, quite frankly. I picked MK up from school yesterday and he was LIVID. One of his very good friends, a boy who has done all of the same band things – honors band, pep band, competitions – with MK tripped and fell in P.E. while holding a medicine ball (whatever the heck that thing is). 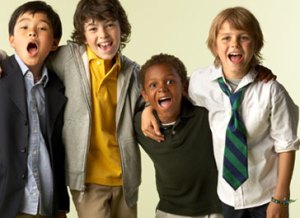 The kids laughed. And were quite cruel in their teasing. And when it became apparent that this kid was badly injured, MK went ballistic on their butts. He reported the mean kids to the teacher and I guess it was so bad that this teacher is going to call a parent-teacher conference with the mean kids’ parents.

MK is not a tattle-tell. And because of his small size, he’s certainly taken his fair share of teasing from the “mean” kids. But MK is nothing if not loyal. And once you’re MK’s friend, then you’ve got him for life.

The boy that was injured is a big boy. He’s a bit on the overweight side but mostly, he’s just a BIG kid. His father is pretty big so he comes by his physique naturally. The mean kids can’t resist teasing him because of his size anyway, but when he fell, it just went out of control.

We had a pretty good talk in the car about how MK handled the situation. I told him I was proud of him for doing the right thing – the mean kids need to learn there are consequences to their, well, meanness. But I also told him that he would likely get some flack for being the “tattle-tell” at school today. He understood that and was willing to endure it – his conscience was clear.

I told him that if it became physical in any way, if he was hurt by another kid in any way, I wanted to know because that’s one thing I WILL NOT TOLERATE on any level – someone manhandling my kid. But if it was verbal, then he would just have to learn to control his temper and handle it because let’s face it, life is full of mean people. You just have to learn to deal with them.

Of course, the boy who was injured wasn’t there. He was the only kid in band big enough to handle the baritone saxophone and since he wasn’t there (they had to take the boy in to the emergency room – I think he messed up his knee pretty badly), it threw the rest of the band off rhythm and they didn’t play their best. They were all pretty upset about their chum and it showed in their music. It was a disappointing performance but the kids learned that there will be times in your life that something bad happens like this and you must go on – there was nothing they could do to help.

The teacher told the kids to play for their buddy. I thought that was sweet.

This episode also reinforces my dislike for physical education in the schools.

I think the coaches ask these kids to do some pretty ridiculous things and then of course, it’s a prime feeding ground to pick on the smaller, weaker kids. Though I can certainly understand the need to get our kids moving, I think the curriculum could be structured a little differently and not so geared toward competition. MK is constantly coming home and telling how crazy out-of-control the kids got when they lost a game.

And then, there’s the whole physical education requirement in college thing. I had to take a P.E. course when I went to college and I was a late bloomer, so there I am, in my early 30’s in P.E. class with 20-something kids. Talk about embarrassing – and a complete waste of my time and money.

And did I mention the kids have to dress out for P.E.? So, you have the whole body image/self-conscious factor at one of the worst ages to put this on kids – the pre-teen/teenagers. It’s truly insane, in my opinion.

I learned the five characteristics to maintain a healthy civilization today:

I will shut up about that now.

My main computer (because I have two PC’s and two laptops – I know, I’m sick), has completely gone berserk on me. It just randomly restarts with no prompt from me and at irregular intervals.

I’ve scanned for viruses and it’s not showing anything (which doesn’t necessarily mean I don’t have one) but it was doing this shortly after I reformatted so I’m pretty sure it’s not a virus. I was lucky enough to make backups of my important files before it completely went nuts, but I still need to back up my emails and I haven’t been successful because every time I start the process, it shuts down on me. I finally just unplugged it and I’ll try it again later.

Instead of buying a new power supply though, I think we’re going to wait until after Christmas and just buy a new computer. I’ve had this computer for a long time and it’s probably time to just chock it and start over. I’d like my husband to build me one from scratch (I’m currently using the computer he built me and this baby is ROCK SOLID), but you can get such a good deal on a ready-made computer from Ubid that it seems silly to go any other route.

If you haven’t checked Ubid out, I highly recommend it. They sell refurbished electronics and we have gotten some amazing deals through them. And if you don’t want refurbished, then think of it like this – someone has already located a problem with the device, these guys fixed it and voila! It’s brand new again, minus the bugs. So refurbished can sometimes be better than brand new. 🙂

The sun is out for the first time in a week. Ahhhh. Hello sun. You are beautiful. Stick around a while, won’t you? Our extended forecast looks good, though we’re scheduled to get some wintery mix on Tuesday, which COULD discourage my sister and nephews from coming down for Christmas.

BUT, our forecast for Christmas is sunny and 55 (!!) so maybe not. I hope not. Of course, it says sunny now, that doesn’t mean it WILL be. Our weather, *shakes head*, is amazingly fickle.

What’s the weather forecast look like in your area for Christmas day?

MK is ringing the Salvation Army bell at the mall tomorrow. That should be fun. Actually, he’s teaming up with two other classmates and he wants to play the saxophone to help entice people to drop some money in the buckets. I’ll take a short video of that (providing he doesn’t chicken out) and post it soon.