I’m not a baseball fan. Heck, I’m not much of a sports fan, period. But if we happen to score FREE tickets to a local sporting event, I’m not likely to turn that down. (Did I mention the tickets were FREE??)

The son of the bass player in Kevin’s band took over our local sportscaster’s job, and he gave Kevin two free tickets to our local minor league baseball team – the Springfield Cardinals. They built this nice stadium in the middle of our sagging downtown area and I thought they were a little crazy putting it there, actually. But it’s worked out for the best because it gave our downtown area a much needed economic kick in the pants.

Anyway. I’ve never been because did I mention I’m not a baseball fan? (And no offense to those of you out there that are? But *YAWN* – baseball is so boring, and long, and drawn out … show me the highlights, I’m good). But Kevin wanted to go, so okay, we went.

I must confess, the stadium is pretty nice. And though the day was overcast and I was convinced we would get rained on (we didn’t), there were actually more people there than I thought there would be, given the iffy weather.

More people than I thought, but not nearly full … as you can see by this picture I took of Kevin.

We had great seats. We were on the fourth row nearly behind home plate. It was the best seat at a sporting event I’ve ever had. And I admit, I enjoyed myself. Our team slaughtered the visiting team. We left at beginning of the seventh inning, right after the “Take Me Out to the Ballgame” song. (We had to go to Kevin’s mom’s birthday party). And after being there for two and a half hours, I was ready to leave.

That was the first baseball game I’d been to in … years. And most likely my last for years. But I’m glad we went. Life’s too short not to take advantage of those free deals. 😀

Issac brought us rain. It rained two days straight. We desperately needed it. This has been a long, dry, hot summer and our local water reserves hit the 60% levels – we were on the verge of declaring water restrictions. (And we may still depending on how much rain we get in the next few weeks).

God answers our prayers – are you paying attention?

We’ve been praying for rain for weeks now. And suddenly, we have rain coming. But it’s not just an ordinary rain storm that finally breaks our drought, it’s in the form of a hurricane that could have hit the coast at any other point, or followed a path around us, but it didn’t.

And don’t you find it interesting that the storm was named Issac? The name of an important man in the Bible? Why not Bob, or Dale, or Greg? Nope. Issac. It was God’s way of letting us know that he answered our prayers.

This past week was crazy at work. We had four doctors every day, except for Friday. I have never focused more, or juggled more things at once than I have this past week.

And that was just ONE WEEK. Nearly every day my job challenges me on levels I never dreamed of. I am constantly being pushed to my limits and though I come home mentally wiped out, it’s accompanied by a deep sense of satisfaction.

I can honestly say that after working this job? There is really NOTHING I can’t do. If I can tackle an industry that I know nothing about and not only stay above water but consistently tread it, then I can do ANYTHING.

I’ve been polishing up my resume. I don’t really have anything specific in mind, but I do have my eye on one company I think I’d like to work for. I’m going to do my homework though and make sure this is what I want to do before just holding my nose and jumping in again. I’m not sure I’m really qualified to work for this company, but I’m going to give it a shot.

Notices have been going out about registering for the flu shot. If nothing comes along before the end of October, then I’ll be getting mine in order to buy myself more time to find another job. As we all know, jobs aren’t exactly falling off trees right now. (Thanks to you-know-who).

I’m waiting until the end of October just in case it makes me sick and I have to miss anything. I can tell you this, if that poison makes me sick, I’m going to be PISSED.

The boys are living their lives. I barely see them anymore. We all meet up for dinner, but being boys, they aren’t exactly spilling their guts about their days.

My children have graduated into roommates and it’s a strange feeling.

This three-day weekend has been awesome. But strangely, I’m ready to go back to work.

There’s clearly something wrong with me.

It’s no secret I’m not a Democrat. Heck, I’m not even sure I’m a Republican at this point, Republicans are so scared and weak to take a stand on anything for fear of being labeled a (*insert latest slang/insult here*). But never mind that, we have two choices now – Obama or Romney. And I would rather vote for an empty chair than for Obama so … Romney it is.

As if we needed to look any further than our unemployment rate to have a reason to vote against Obama, let me give you 60 MORE reasons NOT to vote for this socialist control freak … 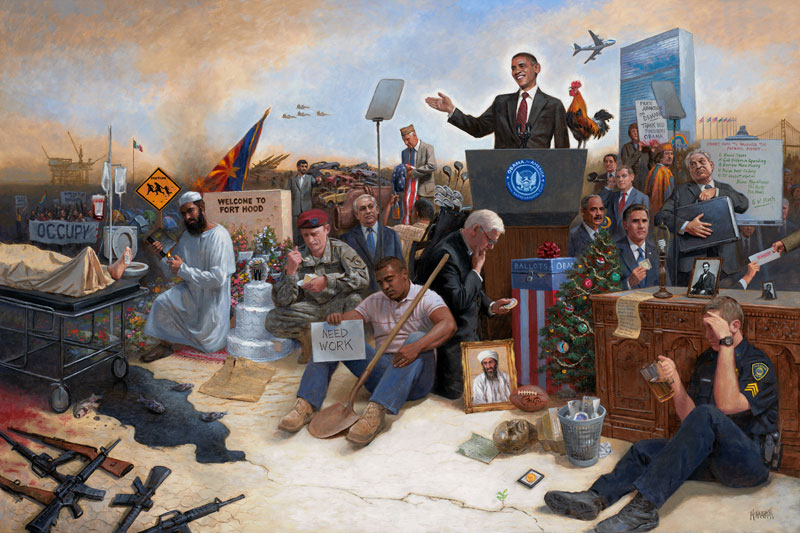 Click over here to mouse over the painting – there are 60 reasons why you should NOT vote for Obama.

Too chicken to look behind the Great Oz’s curtain? Fine, I’ll list just a few of them … hold onto your hot air balloon …

1. Obama has made little effort to balance the budget. He has blocked the republican Congress and reproved their ideas as taking it too far. Eventually, he offered up his own proposal only to be voted down by Democratically controlled Senate 99/0. Not a single vote. Obama is not willing to sign a balanced budget amendment, curb the debt ceiling, or stop the out of control spending which to date has added over five trillion dollars to the national debt just since he has taken office! When asked why things are so bad—it’s Bush’s fault.
Source 1 Source 2 (and there are many more here …)

2. Since Obama has taken office unemployment has gone as high as 10% and not dipped below 8.1%. Among minorities, such as black Americans it is closer to 14%. Real unemployment, if you include those who are no longer looking, or have been unemployed over two years would be closer to 15%. We have not seen these kinds of numbers since the Great Depression and all the while our Welfare programs are paying out more in government aid than ever in the history of our country. Obama recently cancelled Clintons Work for Welfare restrictions. Food Stamps are at all record highs. His programs and fiscal policies are without question not working and on this issue alone he should be run out of office!
Source 1 Source 2 (more)

3. Pushing The Patient Protection and Affordable Care Act through the Democratically controlled House and Senate, although the majority of the American people disapproved of the new law, Obama said it was for our good and Constitutional. We were promised that it would not fund abortions, create death panels and that there was no tax involved. Since the passing of the law it has been proven that all the above is a lie and that the cost is twice the original estimate making it the largest tax hike in US history. The Supreme Court ruled the law Constitutional only after Justice Roberts changed the meaning of the “mandate” to a “tax” versus a “penalty”; otherwise he would have deemed it unconstitutional. Thank you Obama for giving us socialized healthcare–I’m sure that it will work out just as wonderfully as all the other government programs we have.
Source 1 Source 2 (more)

4. Following the 2008 election multiple allegations of voter fraud involving unions such as ACORN, SEIU and other Democratic activists led to little investigation. Obama has since assembled a legal team of over 5,000 attorneys to prepare to defend themselves in the 2012 election.
Source 1 Source 2 (more)

5. Obama has curtailed drilling in America and has jeopardized our energy industries for the sake of appeasing the environmental lobbies while at the same time investing in Brazilian offshore oil development. Invest in foreign country oil but not our own?
Source 1 Source 2 (more)

And just think, this is only FIVE out of SIXTY reasons NOT TO VOTE FOR THIS EGOTISTICAL, POMPOUS A-HOLE.

And for those naysayers out there that are too stupid to see, or too stubborn to change their minds, Obama has once again lied – Romeny DOES have a plan on getting this country back on track and YOU CAN READ IT NOW.

If you still choose Obama after reading about all of these stupid things that Obama has done over the past three and a half years, then congratulations … you’re part of the Obamanation.