This article was originally published on October 24, 2008 at Write Anything, but it still applies today. 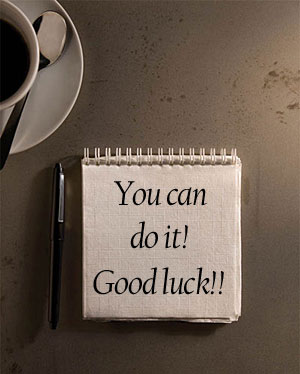 At least, until the challenge “officially” starts, which is what … just a few short hours away? 😀

NaNoWriMo has got to be one of my all-time favorite writing activities. It’s not just about the writing itself (though that’s very satisfying), but the fact that we all come together and share experiences, advice, motivation and support to get through the challenge. I love NaNoWriMo because I FEEL like a writer.

And I have an excuse to put off chores because I have “to write.” 😉

I think writers either get NaNoWriMo, or they don’t. For some, it’s a waste of time. Why write 50,000 words, and go through all of that stress and trouble just to write trash?

And others appreciate and embrace the challenge of actually being productive – we’re no longer TALKING about writing, we’re DOING it.

I know, for me, NaNoWriMo has been my writing springboard. I’ve gone to college and taken quite a few writing classes. Which were great, and I HIGHLY recommend anyone halfway serious about writing in general to do so, BUT, it can actually be counterproductive because there are so many rules and guidelines you must remember that it can sometimes be overpowering, and even intimidating – so much so, that it can squash your creativity.

I think that’s what happened to me. I had been conditioned into thinking if I didn’t write well, then there was really no reason to write at all. That everything I wrote, needed to be worthy of public consumption.

I began the NaNoWriMo challenge in 2005. My novel was called “No Sleep, No Talk” and yes, it was as bad as the title implies. In fact, it stank – royally. I really didn’t have a concrete plot idea, I just sort of allowed my characters to lead me around. It was like feeling my way in a pitch black room; I had no idea where I was going, or where I had been. But man, I had fun writing it.

I have never once thought it was a waste of time. The experience, the LICENSE to let go and simply write whatever I wanted to was thoroughly liberating. I needed permission to let go of my preconceived ideas about writing and simply write. After crossing that 50,000 word line, I felt free, truly free, to be open and honest with my writing, for the first time in my life. I’ll never forget the experience.

In 2006, I wrote “Reality Check.” I took a news article and built an entire story around it. After crossing that 50,000 word finish line, I realized that the premise, though interesting, was a bit far-fetched. Though I still think the idea is cool, I think it might work better for a short story as opposed to a novel-length work.

In 2007, I wrote a mystery/suspense story entitled “Broken Silence.” In essence, it was centered around a group of people who lived on a cul-de-sac and who found themselves stranded after a nasty ice storm raged through. The story was basically trying to survive the elements, each other and some unknown force that was causing people to just … disappear. I still think the idea is marketable. In fact, I will likely go back to my project and rewrite it because that’s how confident I am about this idea. I based this idea on my own real-life experience. In 2006, we had an ice storm dump five inches of ice on us. Our city shut down. Seventy-five percent of the city lost power and we went into survival mode. My family was without electricity for almost 12 days. It was a test of my character, and the characters of those around me.

In 2008 I wrote a romance story. I’d denied myself the genre I love the most for long enough. It has nothing to do with the sexy parts, though there is that, but I’ve always been fascinated with relationships in general – just WHY do men and women connect, anyway?

My story was based around a NASCAR driver, with two possible love interests to juggle, an old family stigma to overcome, and other jealous, spiteful rivals to dodge. I’s fun, dangerous, exciting and sexy all at once.

I thought I would experiment with my 2009 project and write a series of short stories. I took one character from one short story and wrote the next short story using him/her as the main character. It was really fun, but terribly frustrating. It was more of a stop-and-go sort of pace as opposed to a smooth (?) flow of working on one story. I found it increasingly harder and harder to start over again time and time again so that by the time the end of November rolled around, I could barely make myself care, let alone write anything. I probably won’t try that experiment again any time soon. But don’t hold me to that.

For now though, I’ve talked enough. I’m ready to sit back and listen to what ya’ll have to say about YOUR projects. So, here are some questions for you, please answer them in the comment section, or on your own blogs and post a link, I’d love to hear your thoughts.

1. Do you have an idea for your NaNoWriMo project?

2. What instrument will you be writing your novel on?

3. Where will you likely be writing most of your story?

4. When will you likely write your story?

5. What is your daily word count goal?

6. Have you participated in past NaNoWriMo’s? How many years have you won?

7. What do you think about NaNoWriMo in general? A waste of time? Or beneficial?

Thank you again for indulging me these NaNoWriMo posts. I sincerely hope these past posts have helped you prepare for this challenge, or for your writing in general.

NOW, get organized, get those fingers warmed up and …

(Stick around. If I have time, I’ll post some videos of me reading excerpts from my project. The keywords being: If I have time. Also, you can keep track of my progress on my NaNoWriMo profile page as well as receive updates about my progress here via word count widgets [in side bar] or funny little cartoons).

If you would like to read my views on religion and how we got started with the ministry, you can read this.

Did this video bless you? Please consider donating to the Truth or Tradition ministry.

(Comments have been turned off. The information is here to inform and bless you. God granted you the gift of free will – take it or leave it).