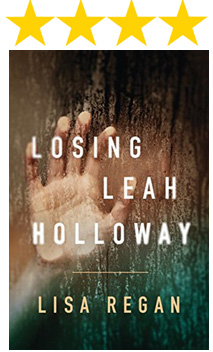 Five years ago, Claire Fletcher escaped her abductor. But some scars never fade, and surviving was just the beginning…

When Claire sees a car full of children careen into a river, she rushes to the rescue. But the driver, a mother named Leah Holloway, prefers to drown. For Claire and her ex, Detective Connor Parks, it doesn’t add up. What would motivate a woman with a beautiful family and a successful career to resort to such unspeakable extremes? What Connor finds out confirms Claire’s suspicions of something dreadful behind Holloway’s picture-perfect facade: a link between the terrified mother and a serial strangler targeting Sacramento soccer moms.

As Claire and Connor are drawn back together, their investigation leads them to unearth everything Holloway was hiding. What they find could be the only way to stop a killer from striking again.

I gave this story four stars but that’s not to say I didn’t enjoy it, I just didn’t love it. And I think I didn’t love it because the “main” characters played more of a secondary role in the story, which makes no sense and on the surface sounds really weird, but in this story, it worked, I just wish the story centered more on the main characters and less on Claire.

Though Claire is an interesting character and the reader feels like she knows Claire through the previous book and she is central to the beginning of the story, (her and her sister witness the car driving off the bridge and Claire is the one who saves the children), she’s not really who the story is about. She is a character who keeps things moving – the glue that makes the story stick together.

This story is not about Claire specifically, it’s about the story that happens around Claire – on her peripheral, and it’s …… interesting.

Once again, the premise is different and disturbing. Though I ultimately predicted where the story was going I wasn’t quite sure how it would end. It was somehow satisfying for Claire to be the catalyst at the beginning of the story and then be the inhibitor at the end of the story as well. That approach felt well rounded and complete, somehow, even though the main story wasn’t really about her.

I know this sounds confusing, but Ms. Regan does a good job of making it work and I appreciated the creative approach to this story. It was almost as if Leah’s story was told through Claire.

And though interesting and entertaining, I still felt like it missed something. Though the author takes us back in time and you can see Leah’s rationale for doing what she did, I still felt like I didn’t really know her, D.J. or Rachel. I would have like to get inside their heads a bit more just to fully flesh out the story.

But I understand why Ms. Regan didn’t approach it this way because again, it was a story that happened TO Claire, it wasn’t Claire’s story.

At any rate, I really enjoyed the bread crumbs that Regan dropped into the story. Things are definitely not as they appear and Leah’s life is all about appearances. I find this concept fascinating because it makes me wonder what sort of lives people are TRULY living when they drop their facade.

We all have a public face, a public persona, but who are we, truly? I can tell you with 100% conviction my public face is NOT who I really am.

What goes on behind closed doors? What are people really thinking? How exhausting is it to maintain that facade? What is the thing that makes that carefully constructed castle finally crumble?

This is really what this story is about. Human endurance and reaching the breaking point. It’s a story about desperation and depression and the lengths people will go to mask those feelings and fake normal. It’s about finally opening the “forbidden” drawers in your psyche, pulling out the horrors folded within and allowing them out to air dry.

And if that doesn’t sound pretty, it’s because it’s not.