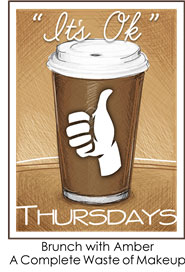 ~ To add an apostrophe to the word “It’s” in the above graphic … (the original graphic does not have an apostrophe – actually, it’s not OK that we have to constantly correct people’s grammar … but what are ya gonna do??)

~ To sound like a grammar snob because I’m sick of people butchering our language and not having the energy to care (but there’s plenty of energy for reality shows. *snap*).

~ To proudly use a Dell and/or a Windows product while surrounded with hard-core Apple people.
(True story: We were coming back home from our trip and was in the San Francisco airport waiting for our flight to Dallas. I pulled out my hot-pink Dell laptop and hooked up with the FREE San Fran WiFi [UM – SWEET!] and I was literally surrounded by people using Apple laptops and other Apple products to surf the ‘net. I got more than a few disapproving looks and you know what? I LOVED IT. I’m sure Apple is great and all but you know what? I wouldn’t know, I don’t use Apple products, other than my iTouch. It’s just that I simply choose NOT to use Apple products BECAUSE everyone else does and goes berserk over it. I’m not a conformer, when will you learn this??)

~ To be completely upset that it looks like it’s going to rain this Saturday and we have a band competition in Oklahoma. (Actually, I might be TOO upset; I’m sort of obsessed with these band competitions).

~ To really hate this swaying sensation that I get every time we get back from a cruise. I’m sitting here now, typing this, and my computer monitor is literally tilting back and forth before my eyes – at least, in my mind. It’s not actually tilting back and forth, but my mind is still stuck in boat mode and UGH … the swaying sensation is a HUGE draw back to cruising. (Ok fine, it might be the only drawback to cruising. I’m not spoiled, honest. Well. Maybe a little).

~ To be relieved, perhaps overly so, that Mitt Romney won the debate last night. At least, according to this CNN poll. And we all know how RELIABLE and UNBIASED CNN can be. *snort*

According to a CNN/ORC International survey conducted right after the debate, 67% of debate watchers questioned said that the Republican nominee won the faceoff, with one in four saying that President Barack Obama was victorious.

What’s really amusing about this news story is this part:

“This poll does not and cannot reflect the views of all Americans. It only represents the views of people who watched the debate and by definition cannot be an indication of how the entire American public will react to Wednesday’s debate in the coming days,” cautions CNN Polling Director Keating Holland

Because if it looked like Obama won the debate instead, this same polling director would have been all like, “And this is a TRUE and ACCURATE representation of ALL American people.”

~ To be ready to go back to work. I’ve been on vacation this week and I’m already itching to get back to work. I’m one of those few people who actually enjoy working. Weirdness confirmed. Heh.

~ To hope that the applications I’ve submitted this week actually land me an interview, or two, or three.

~ To hope that the applications I’ve submitted this week go unnoticed. (Because that would mean I would have to interview for a job I REALLY want – which would mean I’d be so nervous I would likely make myself sick with anticipation).

~ To try and participate in this year’s National Novel Writing Month and knowing that it’s unlikely that I will cross that 50,000 word line because this year I’m working one full-time / one part-time job and I will likely kill myself trying to succeed at this challenge because I feel SO GUILTY for not writing much this past year and I call myself a writer? (Don’t you have to write to call yourself a writer??).

~ To be a complicated human being.