Marching bands have come a long way from just playing the marches of John Phillip Sousa, as demonstrated by a battle of the bands Saturday at the Valhalla Marching Band Festival.

There wasn’t so much as a toot of Sousa’s “Washington Post” march to be heard from just before dawn to the festival’s end near midnight.

Instead, performances by some bands included an homage to Michael Jackson — complete with drum majors in black fedoras and suits and sequined silver gloves — fistfighting horn players in a cowboy-themed performance and even knights in shining armor. 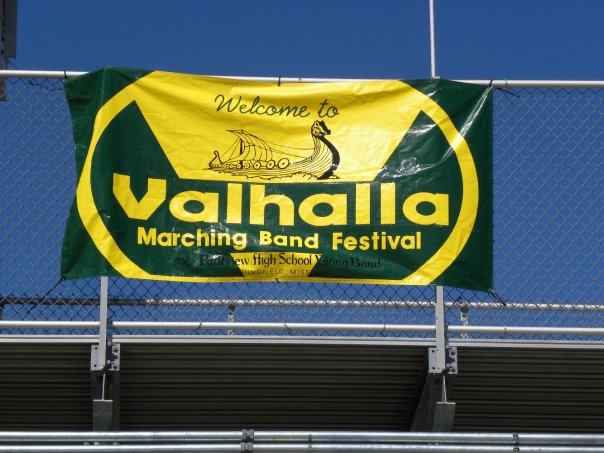 Today, I feel like I’m recovering from a marathon. And I didn’t even run it!

Jazz had his first band competition Saturday. It started at 8:00 a.m., but they weren’t scheduled to perform until 4:45 p.m.

They lumped the participating schools into classes starting at A and ending at D – the class determination depended on the number of winds and brass in the band. Since Jazz goes to a larger school, his school was categorized as D.

His band director wanted the kids to go through the routine one more time before it was time to head to the stadium, so we dropped Jazz off at the school at 1:00 and they spent an hour warming up and going through their songs. At 2:15, he called me and we came back home so he could change. (He actually took his uniform to school with him, but didn’t know he needed to change first before we arrived to pick him up – but it was all good, we had time. Poor kid was so scatter-brained and excited, he didn’t know which way was up).

We arrived at the designated area and dropped him off. Me, Kevin and Dude then went up to the stadium and paid our $7.00 bucks each (yikes!) and took our seats. We arrived just in time to see the last few bands in the C class perform.

They were spectacular. In fact, every single band we watched was absolutely spectacular. I can’t IMAGINE being the judges, talk about tough decisions!!

Our kids were the first band in the D class to perform. And they did great. The Color Guard gals really looked beautiful and though our songs were slower and quieter than most of the other bands’ songs, they were classy, elegant and really, really beautiful. I had serious doubts about the music selection going into the competition, but I can now see why the director picked those pieces. They were unusual and really difficult for a marching band to perform, and perform well.

And our kids? Played them perfectly. I couldn’t have been more proud of them.

But the problem with being first? You have to sit through and see the rest of the competition.

And OH. MY GOSH. The bands that came after our kids were phenomenal. No seriously, they blew me away! They had PROPS, and BIG MOVES, and FUNKY, UNUSUAL music and it was all IN YOUR FACE sort of entertainment so that by the time all of the bands had performed and we were waiting to hear who won what in the prelims and who would go onto the finals, I was depressed and absolutely terrified. Our kids were fantastic, and their talent certainly measured up to everyone else’s, but I was worried the actual show wasn’t flashy enough. Our Color Guard girls wore classic white, flowing costumes and our drum majors wore all white, smart drum major uniforms, which is great, but when compared to the sparkly and outrageous costumes that some of the other Color Guards wore, or the actual ball gowns that some of the other drum majors wore (my brain shut down at that point – BALL GOWNS?!), I was seriously worried we wouldn’t get into the finals.

Here is a short mash-up of the prelims – our kids aren’t on here, but you’ll get a general feel for what sort of entertainment we had the privilege to watch that day.

Thirty-two bands performed, only 12 would go to the finals. I was chewing my fingernails, I was so nervous for our kids.

The time came. All of the drum majors lined up to hear the results. I should have taken pictures of them all lined up, but I was honestly so focused on what was going on, that thought never even crossed my mind.

Our Color Guard won the outstanding auxiliary!! This was quite an honor considering ALL of the other creative performances!!

Then it came time to read which bands placed and which ones would go on to the finals.

I felt faint. All of our kids had gathered across the field and were sitting in the away bleachers. I thought it was so classy of them to stick around and watch the other bands as opposed to going back to their base and changing out of their uniforms, like all of the other bands did.

Fourth place was announced. It went to the school the boys’ friend attended.

Now the pressure was really on.

Oh my gosh, the entire band were on their feet and cheering, it was so exciting!!

But we weren’t out of the woods yet. According to the rules:

The first place band in preliminaries in Class A, B, C, & D automatically make finals. The next & highest scoring bands, regardless of class, complete the finalist bands.

So even though we placed third in the prelimiaries, it didn’t necessarily mean we would go onto the finals – it all depended on our scores.

And I meant to keep track of our scores, but like a dolt, I didn’t buy a program until after finals started. Yeah, I’ll be more prepared next year. (No I won’t).

They began announcing the eight bands who would go on to the finals (because remember, the bands that placed first in their class were automatically entered).

Name after name was called and my heart continued to pound harder and harder with each name called. I had to hold onto the railing (because by this time, we were standing on the sidelines) to keep from keeling over.

I lowered my head and with each name called, I kept saying our kids’ school name hoping that would somehow make the announcer call our band.

They called for a break and we walked across the field to meet Jazz. The band hadn’t been excused yet so we stood around and listened to their band director caution them about eating heavy, greasy, fatty foods and to stick to water, no carbonated drinks (it would dehydrate them). He then asked everyone to meet up at “their” place at 9:15 p.m.

It was sort of a mad house to get out of there, but we took Jazz to Taco Bell (making sure he didn’t order anything greasy and making doubly sure he didn’t spill anything on his overalls). He was too excited to eat, but I made him scarf down a chicken taquito and drink some water.

After bathroom breaks, we headed home.

I didn’t allow him to compete in finals. It was getting late and he was looking so exhausted that I didn’t think it was in his best interest to continue.

No, the temperatures had plummeted by that time and we were all freezing. So we ran home to grab a sleeping bag, I could change my shoes (I was wearing these and my toes were frozen solid) and Dude wanted to grab a stocking cap.

After we grabbed our extra gear, we headed back to the meeting place and dropped Jazz back off. Since the bands were using one of the other high school stadiums (a bigger and better facility), all of the competing bands were stationed all over the area. Our band actually happened to be using a neighbor’s yard. I’m sure that wasn’t annoying for the poor guy. lol

We headed back to the stadium and watched the bands compete for the “hardware” (i.e. trophies), one more time.

I don’t know what their band director told them, but I can honestly say, these kids never played so hard, or concentrated so much on doing a great job as they did in this last performance.

They were perfect. The songs they played require them to get really soft, then go loud, then go really soft again and oh my freaking gosh, it was so pretty I had tears in my eyes (of course, it could have been the cold wind or the fact that I was emotional, but we’ll go with touched). And I’m not just saying this because it was MY kid in that bunch; they were breathtaking.

Two more bands performed after our kids and then it was time to wait to hear the results.

And still, they hadn’t called our school. My heart rate jacked up into over drive.

I was near breaking point. We made the top five?!?

They then announced the top three and I have to say, I totally agree with their choices. The top three schools were … I don’t even know what adjective to use – they were THAT good. And they certainly deserved their wins.

Again, our kids sat on the away bleachers and though they cheered, they really didn’t cheer that much – they were reserved. Which I thought was odd. Maybe they were in shock?

People began filing out of the stadium and we began the journey back across the field again. It was only when, after the drum majors had made it back over with our trophies (because our Color Guard? Made Outstanding Auxiliary again in finals!), that our kids came alive and screamed with excitement. Everyone paused as they were leaving to look over and smile.

Here is a picture of Jazz after we located him and gave him his much deserved congratulations.

Saturday was one of the most exciting days in recent memory. I’m still recovering. Jazz was just exhausted yesterday and actually felt a little sick. But after getting plenty of rest, he felt better today. I think it was all the adrenaline and the excitement that got to him.

Next weekend, we head to St. Louis for the Bands of America competition. I can’t wait.

I hope my heart can take it.