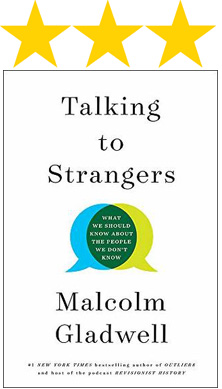 How did Fidel Castro fool the CIA for a generation? Why did Neville Chamberlain think he could trust Adolf Hitler? Why are campus sexual assaults on the rise? Do television sitcoms teach us something about the way we relate to each other that isn’t true?

While tackling these questions, Malcolm Gladwell was not solely writing a book for the page. He was also producing for the ear. In the audiobook version of Talking to Strangers, you’ll hear the voices of people he interviewed–scientists, criminologists, military psychologists. Court transcripts are brought to life with re-enactments. You actually hear the contentious arrest of Sandra Bland by the side of the road in Texas. As Gladwell revisits the deceptions of Bernie Madoff, the trial of Amanda Knox, and the suicide of Sylvia Plath, you hear directly from many of the players in these real-life tragedies. There’s even a theme song – Janelle Monae’s “Hell You Talmbout.”

Something is very wrong, Gladwell argues, with the tools and strategies we use to make sense of people we don’t know. And because we don’t know how to talk to strangers, we are inviting conflict and misunderstanding in ways that have a profound effect on our lives and our world.

It wasn’t due to lack of interesting content, all of the examples that Mr. Gladwell presents are interesting, his points are well taken, they are also well articulated, when he gets around to making them. And the thought that the “supposedly” brightest minds in the world are incapable of detecting bullshit is more than a little alarming. (As evidenced by his examples).

I gave this book three stars because of the way this book is laid out. Mr. Gladwell gives us example, after examples, to prove points that he doesn’t quite allow the reader to digest before moving on to give us yet another example or another aspect of communicating so that by the time I reached the halfway mark, I was ready to just scream, “JUST GET TO THE POINT ALREADY!”

I suppose, after reading the above blurb, I was expecting a mind-blowing, profound solution to talking to strangers – a how-to guide to communicating and understanding a stranger’s non-verbal language. I was expecting some tips and tricks on HOW to talk to strangers, but Mr. Gladwell instead shows us, through historical events, that it’s nearly impossible to truly know a stranger’s motives.

With all due respect, Mr. Gladwell, duh.

In essence, this book is about reminding us not to jump to conclusions when speaking to total strangers. We don’t really know the motivation behind someone we just met. We may think they are honest, they may appear sincere in their body language and facial expressions, but Mr. Gladwell’s point is: it’s virtually impossible to truly know people.

This quote perfectly sums up this book: The right way to talk to strangers is with caution and humility.

However, let’s be fair, there are a lot of television shows, movies and online sites that tout the ability to teach someone to tell if someone is lying or not. And if the person’s motivations match their non-verbal language, then we will likely correctly interpret whether someone is telling the truth, but if someone truly wanted to fool us, it wouldn’t be hard to do.

As Mr. Gladwell states, we all default to believing people are inherently good. We want to believe that people are honest and truthful because no one wants to believe that people are capable of lying or generally being assholes. And now, with the aid of the media, we are constantly reminded to be careful, don’t trust anyone, people have ulterior motives and no one really cares about anyone but themselves, (it’s all about ME), that now I think the pendulum has swung in the opposite direction and most people default to thinking the WORST of people right off the bat. Which Mr. Gladwell shows us is also a very dangerous road to travel.

So, what now? How do we successfully communicate with strangers? I don’t have the answer to that question and I don’t feel like Mr. Gladwell answered that question either, he simply reminds us that in order to effectively communicate with people, one must be patient, kind and understanding because people are the byproduct of their life choices and personal history and if we understand that crucial factor, then we are more likely to understand a person’s motivations and temperament.

If you’re looking for a how-to book on how to talk to strangers, this is not it. But if you want a glimpse into the human psyche and a thought-provoking read, then enjoy.