I’ve gone a little overboard on buying reading glasses. (I bought all of these glasses, except for the second row, middle picture, through Coastal.com – no, this is not a sponsored post. 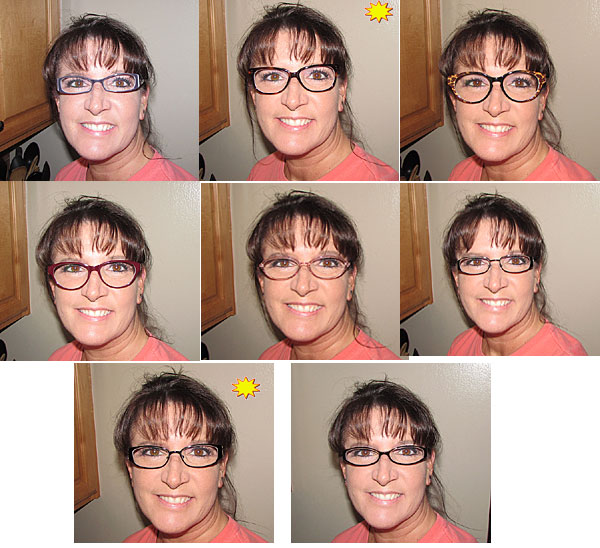 I shouldn’t even BE wearing glasses but my eyesight is poor today because of me.

Back in the early 2,000’s, (that’s still seems so weird to type), I went to college. I went to college because 1. it was a life goal of mine and 2. I wanted to set a good example to the boys.

I’ve never really been smart, per se, I have a lot of common sense and the ability to think logically so that saved my bacon when it came to studies. But I came up with this (not-so) brilliant idea of wearing glasses because it would give me a mental “boost” – I would FEEL smarter.

And it worked – I did feel smarter and I felt like I did better. I don’t know why I did this, it’s stupid and I DON’T RECOMMEND it, but again, I’ve never claimed to be overly smart.

This wearing glasses tactic worked as far as my grades but it ruined my eyesight.

That’s not to say I wouldn’t have needed reading glasses later in life anyway, but it would have at least delayed the inevitable by about ten years.

Now? I can’t see squat up close without them. And I can’t really see that great overall without them, but I’m too stubborn to wear them all the time. I can see fine far away, not so great up close.

What really concerns me is I have to renew my driver’s license in November and I’m really hoping I can pass the eye test without my glasses because I don’t want it to indicate that I have to wear my glasses on my license. Again, I see fine far away, but can’t see very well up close so wearing my reading glasses to drive would not be a good idea. I wonder if they will allow me to take the eye test with my reading glasses but not make it mandatory that I wear them on my license? This is all new territory for me.

I have eight pairs of reading glasses. I know – that’s excessive. But I sort of became obsessed with Coastal.com when a friend of mine at work told me about the free pair she got through Coastal.com. (I really must stop talking to friends at work about stuff – it ends up costing me money).

So I went on to the site and started looking around. Then I uploaded a picture of myself and spent HOURS trying on virtual glasses to see how they looked. And then, Coastal figured out I had made an account and started sending me promotional emails about deals and well – eight pairs of glasses later, here we are.

The biggest reason I have so many glasses is because it’s fun to shake up “my look.” I wear scrubs all day every day, I GET BORED. And the only thing I can do about it is switch up my accessories once in a while.

The two pictures with the starburst in the corners are my favorite glasses. I wear those the most. I also feel stupid wearing the cheetah-looking glasses, (top row, last picture on the right) but I always get a lot of compliments from co-workers and patients together when I do. Maybe they all really hate them and don’t want to hurt my feelings. ha!

It’s been two years since my last eye exam. (I feel like I’m confessing a sin here). And honestly, it’s probably about time for me to have another eye exam, but so far, my glasses are doing a pretty good job of maintaining my eyesight and I won’t even tell you how much I’ve spent on glasses (hint – none of those pairs, well maybe one pair, was more than $50) and I don’t feel like I’ve gotten my money’s worth out of them yet, so I’ll hold off on a new eye exam because I’m sure the prescription will come back that I need stronger glasses and I’m not ready to drop another fortune on glasses just yet.

(Side note: my left eye is weaker than my right eye – that’s weird, right?)

Kevin’s eyesight is worse than mine. His prescription is for actual glasses, not just for reading. He’s getting pretty sick of wearing glasses and has made an appointment to have his eyes checked for contacts. He actually looked into laser eye repair but they told him that since he can see far away but can’t see close, that type of procedure would not be helpful to him. They could do one eye, but not both. Not sure I understand the rationale behind that, but okay.

Kevin’s sister wears one contact so that she can see both up close and far away, not sure I could handle that but she seems to be okay with that solution.  I’m not sure how they will fix Kevin’s problem so that he can read but still be able to see long distance with contacts, but we’ll see what they come up with.

I honestly don’t mind glasses. I’ve gotten so used to them now it’s weird when I don’t wear them. But Kevin has gotten tired of always having to have his glasses close by and he says he doesn’t have a problem with sticking something in his eyeball, so we’ll see if contacts are a better solution for him.

Me? No way. Just the thought of touching my eyeball makes me heave a hairball. I’ll just stick to multiple pairs of glasses, thank you very much.