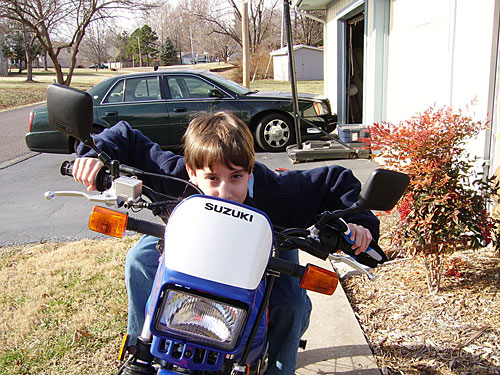 Blake. On Kevin’s dirt bike. Back before Kevin had his motorcycle accident in April 2010.

I’m pretty sure this is the closest Blake will ever get to a motorcycle after watching his dad recover from a crushed pelvis.

It’s amazing how things have changed over the years, especially in the realm of education.

Once upon a time, there was this magical concept called personal responsibility and students were expected to do their homework, study, work hard, and get good grades.

When a student doesn’t do their job or work hard to get good grades it’s the teacher’s fault, not the kid’s incredibly flabby work ethic.

This lack of personal responsibility is why we have a future generation of self-entitled knuckleheads making a career out of being on welfare.

This applies to adults, too.

I told you I wanted to be a dancer, didn’t I?

No? Well, now you know. But I didn’t have the flexibility for it and … oh fine, I never went down that road because dancing is HARD.

Whenever I’m feeling … off, or need to relax or simply escape, I will crawl into bed, put my earbuds on, open my Pandora app on my phone and fantasize that I’m a great dancer who spontaneously breaks into dance at work, or I’m a professional dancer on stage, or I’m simply out and about in daily life and no one ever finds that weird or disturbing and I MOVE people with the my interpretive dance.

I think that’s why I love, love, LOVE this video.

Did anyone else get goosebumps watching this? 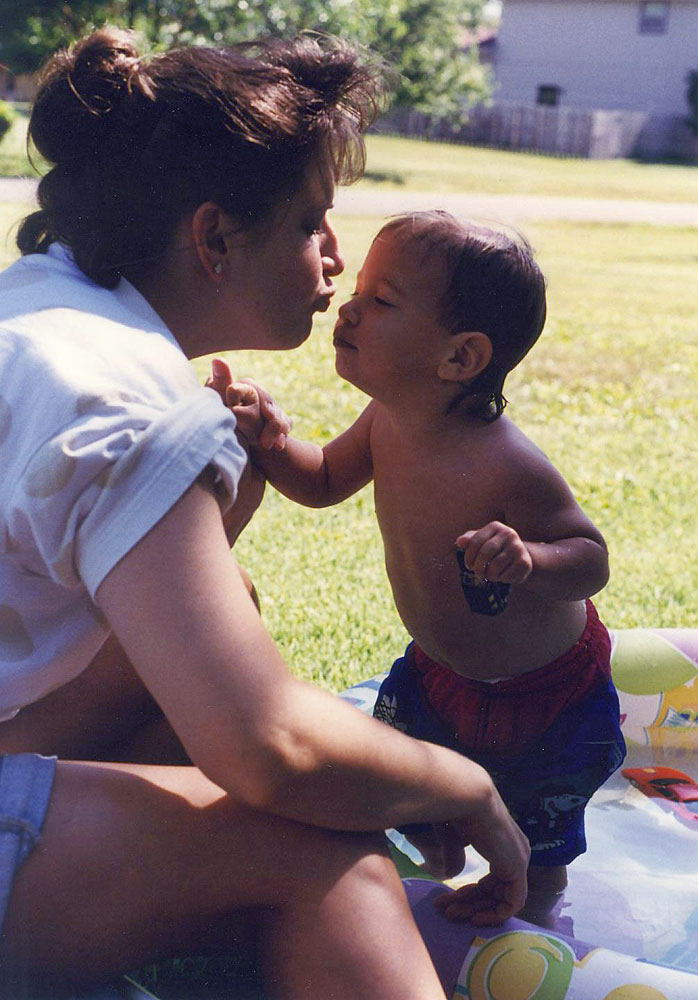 I have discovered up-dos, spin pins and dry shampoo. Suddenly, my life is waaay easier.

Seriously. Where have I been all this time??

I’ve been washing my hair every other day, (confession, I still wash my hair every other day), but now, when I’m feeling super lazy on the weekends, (because I don’t feel super lazy during the week – who has time??) I can spray some awesome dry shampoo, (I’m still experimenting, I don’t have a favorite, yet), put my hair into a high bun, use two long and two short spin pins and I’m good to go, baby!

Honestly, these three tricks have suddenly made my life a whole lot easier.

Yes. I know these things have been around for years but I’m slow, I’m years behind apparently.

I’m growing my hair out. And when I finally wear my hair down at work again, (in the Fall because I will spontaneously combust if I wear it down at work in the summer – TOO HOT), then people will gasp with surprise because it will be about three inches longer than it was at the beginning of the summer.

My hair grows super fast. Like, about an inch per month. Though it doesn’t seem to be growing as fast as it did – age, I guess.

Anyway. You may now resume your life. I know what I just shared with you was earth shattering.

I hope you’ll take time to listen to these audio teachings, if not here, then perhaps you’ll consider downloading them and taking them with you?

What the Bible really says about Death, Judgment, Rewards, Heaven, and the Future Life on a Restored Earth. God originally planned for mankind to live on earth, and His plan, though postponed by sin, will not be thwarted – it will come to pass in the future when a new earth is created. The Christian’s Hope shows from Scripture that each Christian will be rewarded in the coming world in direct proportion to the quality of how he lives for God in this world.

Click the arrow to listen to the Hope of Israel.

A Biblical Look at “Hope”

In order to properly understand the Christian’s hope, it is important to examine the exact meaning of the word “hope.” “Hope” means “a desire for, or an expectation of, good, especially when there is some confidence of fulfillment.” It is used that way both in common English and in the Bible. However, the Bible often uses the word “hope” in another way—to refer to the special expectation of good that God has in store for each Christian in the future. This includes the “Rapture,” receiving a new, glorified body, and living forever in Paradise. Today, the ordinary use of “hope” allows for the possibility that what is hoped for will not come to pass. However, when the Bible uses the word “hope” to refer to things that God has promised, the meaning of “hope” shifts from that which has a reasonable chance of coming to pass to that which will absolutely come to pass. To be a useful anchor, hope must hold fast.

We didn’t buy fireworks this year. I don’t know, we just weren’t into it this year. In years past, we bought fireworks at a place where Kevin’s parents knew the owners and we would get a really good deal. The owners would pack us a bag full of goodies (because let’s face it, fireworks look the same and you really don’t know what they are going to do, but the fireworks stand owners know and are a great resource if you’re looking to get the most bang for your buck. [pun intended]), and we would split the cost with Kevin’s parents.

We’ve gotten some REALLY good fireworks with that arrangement for the past several years.

We would then have a cookout at Kevin’s folks’ house then shoot off our awesome fireworks. Me, Kevin’s mom and dad would sit on their pergola and Kevin, Blake and Brandon would run their butts off and light the fireworks.

Then, when it was over, we would all go out with bags and pick up the aftermath.

We did this for two reasons: Kevin’s parents live outside of the city limits thereby giving us a venue to blow our money [pun intended] and it gave us a chance to spend the holiday with Kevin’s parents. Because for whatever reason, Kevin’s sisters have never included Kevin’s parents in their 4th of July festivities.

However, we broke tradition this year. Money is tight and having us over for a cookout is a lot of work for Kevin’s parents, who are getting up there in age. Everyone agreed with this plan except Blake – he was disappointed. I think 4th of July is his favorite holiday. He loves blowing things up.

(That desire has always sort of bothered me, to be honest).

This year, Kevin’s parents came over to Roy’s house (i.e. the rental house) and we, (i.e. Kevin) cooked hamburgers and curly hotdogs. Kevin, Roy and Blake swam and Kevin’s mom and I sat on the edge of the pool and chit-chatted. Kevin’s dad napped.

When it got dark, we drove over to the nursing school parking lot and mooched off the spectacular fireworks show at the country club.

I imagine that will be our 4th of July plans for many more years to come. Cheap and easy.

And now it’s way past my bedtime and my eyes are drooping. I have a lot of chores and studying to do tomorrow before the boys come over to swim and then have nachos with us.

Happy birthday, America. You’re not the same awesome country you were twenty years ago, but we still love you and haven’t given up on you. You’ll be great again someday …