That statement doesn’t even seem real to me. Though in some ways, it feels like he’s been living in the rental house for months, not simply a few weeks.

I’ll be honest, I was skeptical. I’m still a little skeptical but more optimist now. The novelty is wearing off but once again, Kevin has surprised me with his determination to MAKE this work. He keeps him busy. So busy, in fact, that Roy collapses into bed at the end of the day. It’s not that he’s physically busy, though Kevin does a pretty good job of keeping him busy washing windows, taking out the trash, sweeping, cleaning up the kitchen and vacuuming at his office, but he makes sure Roy is mentally exhausted as well.

And that’s a good thing. If he’s busy he won’t get into mischief.

I saw Roy out washing the windows on the rental house this morning. The rental house has huge windows, which is one of the things I love about the house (funny – but people either love those windows, or they don’t – it’s rarely in between).

We didn’t tell Roy to get out and wash the windows, he took it upon himself to do it. However, when we went shopping last night, I called Kevin on his cell to ask him if Roy had any Windex, that since this weekend was supposed to be nice (and it is – it’s GORGEOUS outside right now [I actually wrote this last weekend – it’s cloudy and supposed to snow later tonight]), it would be a good opportunity for him to wash the house windows. They’re very streaky and it’s very obvious since the afternoon sun shines right into the front living area. 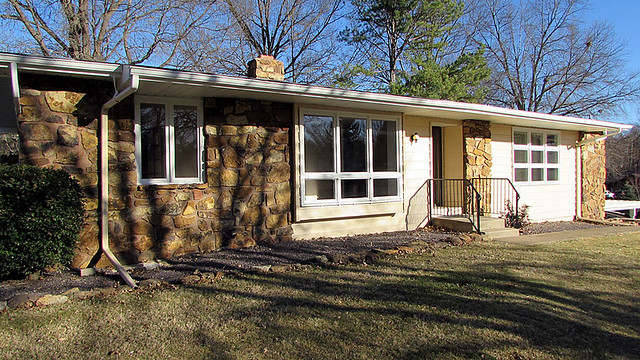 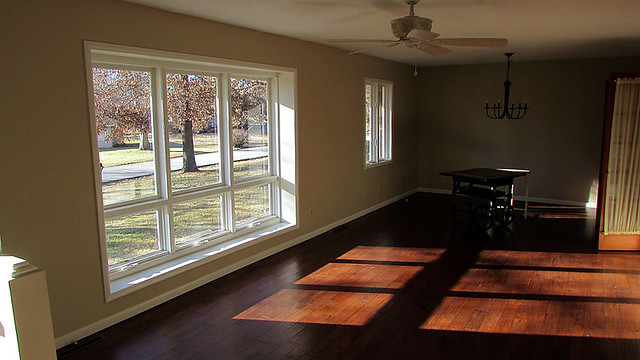 (Friday night is our grocery-shopping night. We take Roy with us. When we get there, we go our separate ways: I do our shopping and Kevin takes Roy around and helps him pick out the stuff he needs. He also helps Roy understand the cost of things and teaches him how to budget his money. Can you believe he’s never been taught that before?? Also. Saturday is wash day. Roy brings his clothes over to our house and starts a load. He then goes back home and I finish his laundry. I think I about have Kevin talked into buying a washer and dryer for that house at some point – MAJOR rental perk, I’m sure!).

Roy doesn’t live in the front of the house (pictured above – that’s the living/dining room when you walk in the front door). There’s no reason for him to use the front two rooms. He stays in the back of the house, in the family room, just right off the kitchen. 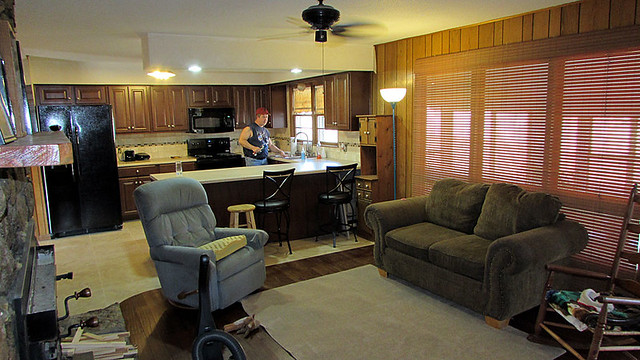 Kevin and Roy went and picked up the sofa you see in the picture today. They got it from our niece and her husband – they’re moving into a house and didn’t need it anymore. The sofa actually used to be in Kevin’s dad’s shop before he closed up his business. It’s a decent couch and not bad for FREE. 🙂

Roy was feeling a bit like he was living in a fish bowl and had been talking about buying blinds for the huge window just behind the sofa. (There’s a sun room on the other side of that window and though there’s a privacy fence in the backyard, the house is up high enough that his neighbor can see into his house and that creeps him out. That would creep me out, too.

When Roy gets something into his head, it stays – FOR-EV-ER. And when him and Kevin were at Lowes, (they practically live there), Roy spotted some outdoor roll-er thingie shades and wouldn’t you know it, they fit the large window. They’re not ideal and at some point we’d like to have some custom blinds on that window, but they cover the window and work at concealing Roy so he doesn’t feel like his neighbor can see every little thing he does.

Kevin thinks I should write about Roy more often. He wanted me to start a new blog and just tell Roy’s story but hello – HAVE YOU MET ME!? I can barely keep up with this blog, let alone a brand new one. But I do want to write about Roy more. He continuously surprises me. I’m ashamed to admit, even though I’ve known Roy for about 27 years, I haven’t really gotten to know him until these past four weeks. He’s actually pretty funny. And he will say things that convince me that he’s not NEARLY as slow as the family has made him out to be all of these years. I just think the family has written him off and haven’t taken the time to teach him things. Yes. He requires patience. And no, there IS NO WAY I could take him on, full time, like Kevin has. Kevin checks on him and keeps him close EVERY. SINGLE. DAY. I could not do that. Judge if you must but I’m just being honest. I don’t have the patience required for that much full-time care taking, however, I’m really glad that I’ve gotten to know Roy because he’s a pleasure to be around.

Yes. He can be devious. Yes. He can be sneaky. And he is mischievous at times. You have to take everything he says with a grain of salt. He doesn’t lie, per se, but he definitely stretches the truth sometimes. The fact that he KNOWS to do that also convinces me he’s not that bad off. He needs constant reassurance and that means he asks the same questions over and over again, (so that you finally have to say, “Roy. Enough. I’ve already answered that question and I won’t answer it again”), and he CONSTANTLY apologizes for, well, being human. Whenever he drops something, or he forgets to do something, or accidentally gets in your way, he’s like a whipped puppy and he apologizes. It sort of breaks my heart, if you want the God’s honest truth. The more I’m around Roy and the more he casually mentions what Kevin’s parents have said to him or treated him, the more I want to go over and give Kevin’s parents a piece of my mind. However. Again. Take it a with a grain of salt. How much is exaggerated to garner sympathy?

Roy dyed his own hair. When he was living with Kevin’s parents, they would keep his hair army short. And since he’s in his mid-forties, he is getting gray hair. This really bothers Roy. He doesn’t like his gray hair – he feels old. He doesn’t like to look old because in his mind, he’s not old – he’s still a young adult. (But then again – do ANY of us really like going gray?)

So he bought a box of hair dye at Wal-Mart the other day and when he went grocery shopping with us on Friday night, I didn’t even notice that he had colored his hair – he did that great of a job. He colored it just enough to take most of the gray out but it doesn’t look artificial. I was quite impressed. Kevin also trimmed up the sides and back so it’a little longer and Roy is in heaven – he thinks he looks sexy. HAHA! He is, however, terrified of what Kevin’s mom is going to say about it because she would never allow him to color his hair when he was living with them.

And that breaks my heart. Every little independent thing he does, the first thing he says is, “I hope ____ doesn’t get mad at me.” That’s how much control she had over him. We keep telling him, “so what – who cares what she thinks,” but deep down, Roy is terrified that she will assert control again and make him move out and back in with them.

And we keep telling him that’s not going to happen.

Again with the patience factor. We’ll just have to prove to him that we’re moving forward, we’re not moving backward and he’s not moving back in with Kevin’s parents – ever.

We’re going over to his house tonight for dinner. He bought himself a crockpot at Wal-Mart last night and he’s cooking us chili for dinner. I’ll probably cook some cornbread and take it over there. We thought him having a crockpot would be a good idea, then he can cook himself some meat and make several meals out of it. We’re still not comfortable with him using the oven, at least, unsupervised, so this is the next best step.

Oh – and by the way – Roy’s dog, Misty. They took her to the vet and they pulled five rotted teeth. She’s doing well. In fact, she feels loads better (I can imagine!). So all is good on the dog front. She’s definitely moving slow, though. The vet said he thinks she has arthritis in her hips, which would explain the way she sort of waddles when she walks. She’s also on a diet – Roy has been feeding her too much and she’s getting fat. So now he measures out how much food to give her. It’s little things like that, not knowing when to stop giving her food, or when to stop feeding himself, that makes him need constant supervision.