So. I can’t remember if I told you guys that our rental house has a pool. 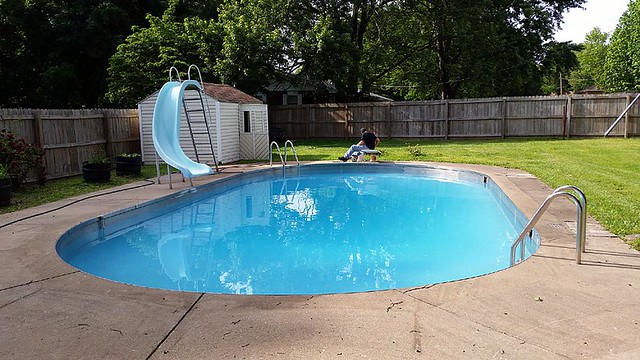 It did not look like this when we bought it. It was dirty filthy and had disgusting sludge in the bottom. Kevin and Roy sucked/shoveled out the sludge and used the pressure washer on it. Kevin and Roy found a pressure washer at a yard sale, (they have both been scouring yard sales lately and it’s been AMAZING the kind of stuff they have been finding! Pretty much everything that Roy has been needing for his house. I truly believe God has been providing for Roy because he wouldn’t have been able to afford these items otherwise. GOD IS SO GOOD!), and Roy used that (for days – he loves the pressure washer) on the concrete around the pool, the slide and the diving board along with the interior of the pool (removing the old paint). 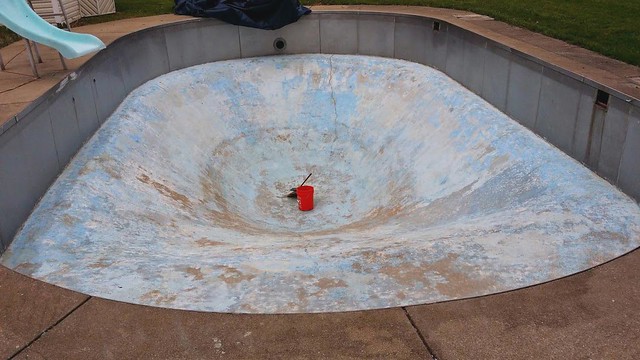 Kevin and Roy then painted the interior of the pool and Kevin has been working on making sure the pool will hold water. Which, has been touch and go. His current headache – something to do with some valve, blahblahblahblah, will have to dig, blahblahblahblah. Honestly, valve and dig were the only two words I heard. lol 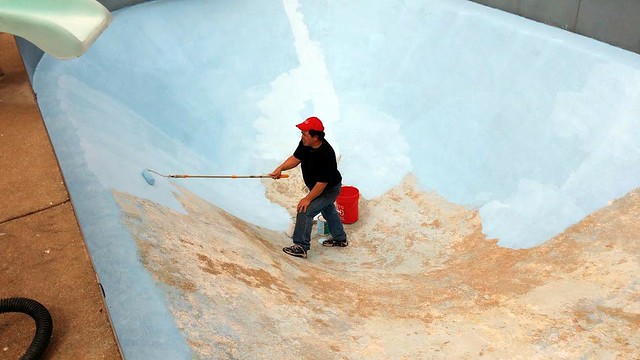 Kevin said he’s going to have to do his first digging since working on the pool.

I’ll be honest. This stupid pool has been my biggest concern since purchasing this rental house. It’s an ongoing project that will always cost us money to upkeep and maintain. And when we bought the house from the previous owner, he told us he had a pool company come out and give him a bid on how much it would cost to fix up the pool and make it usable again. He quoted thousands of dollars. So when Kevin said he was going to get the pool up and running by this summer, dollar signs began to flash before my eyes.

However. Once again, my husband has surprised me with his resourcefulness. He has watched countless YouTube videos, (what did we do before YouTube??) about how to fix the pool and dog gone it, he’s gotten it to the shape you see above. Roy has “helped”, though not really. He “helps” but standing by and watching – Kevin is really the one who can take credit for this feat.

The weather has been cool and rainy thus far. Kevin said the pool water is a cool 60-some odd degrees right now, too cold to go swimming, but he fully plans on using the pool as soon as it warms up and I’m quite confident he will have fixed this latest problem when that times comes, too.

Notice I said HE plans on using the pool. I will stick my feet in the pool and soak up some sunshine. My swimsuit days are OVER. Thank God. 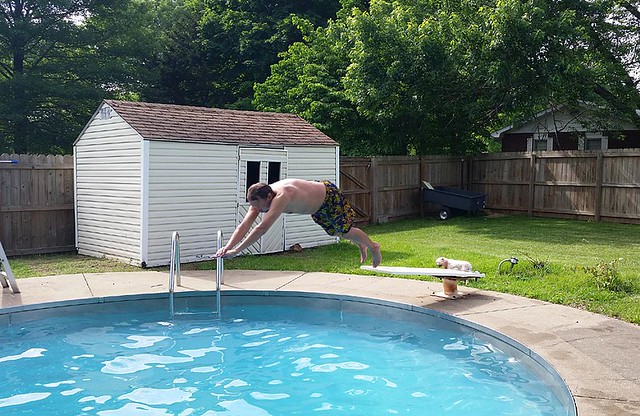 (I can already feel my resolve weakening after watching Kevin dive in. Dang it!)

This wallpaper used to be in one of the bathrooms in the rental house. And this was actually just one of the pictures on the wallpaper. There were several different bathroom scenarios – I think one of them was a naked man peeing into the toilet.

What were they thinking putting that on the walls? Were they trying to be funny? Because it wasn’t only inappropriate, it was the ugliest wallpaper I’ve ever seen.

I wonder if we’ll look back on the fashion choices we’ve made today and think, “What was I thinking?”

Actually. We already do. HA!

So. For those of you that don’t know – we bought the house across the street from us.

The previous tenant passed away and her house and belongings went to auction in late October of last year. Kevin and I went to the auction. Kevin hinted he wanted the house, but I didn’t take him too seriously. As soon as I walked into the house, I knew it would be a money pit. It was run down, dated and simply OLD. It would take quite a bit of money and elbow grease to bring it up-to-date.

I felt sad as I walked through the house and saw other people pawing through her stuff. I feel this way when I go to garage sales too … people judge and barter for other people’s junk, or in this case, this woman’s entire life.

The auctioneer was doing his thing and bit by bit, the woman’s belongings left the premises. I couldn’t watch anymore and I walked back home. Kevin said he would let me know when the house went up for auction because he planned on bidding on it. Part of me was terrified, but most of me didn’t think he would actually do it.

He not only bid on it, it came down to just him and one other guy. Luckily, he DIDN’T get it. I breathed a huge sigh of relief.

The morning of my birthday, I saw a “FOR SALE” sign in the yard. I groaned and knew, KNEW, Kevin would jump on that. He did. He went over and talked the guy into a reasonable price and, well, wenow have a rental home to fix up. I’m still not sure why the guy wanted to sell the property so quickly after buying it. I was very suspicious (and still a little am, if you want the truth), but it’s a done deal now. The guy who originally bought it had his guys go in and tear up all the floors – ripped out the carpet and the linoleum in the kitchen. That alone probably saved us about $5,000. The bathrooms were the worst – blue tub, blue toilet, blue walls, blue/white tile … and the master bath even had some sort of funky bathroom wallpaper, complete with naked people – classy.

The first “we” (henceforth also known as Kevin) did was demo the bathrooms. The bathrooms were impossibly small and ill conceived, so Kevin reconfigured them so that both bathrooms would have a tub and a shower (as opposed to the master bath only having a shower) and set to work with his sledge hammer and demo’d the crap out of the bathroom walls and floors.

Here’s a video of the aftermath …

Kevin put an ad in Craig’s list for a contractor and we lucked out with a father/son combo that set to work on the house. They put in new tubs, toilets, tile, vanity (just one – you’ll see in the video) and tiled the showers. They did a really nice job and they look 110% better than they did.

Then they put new tile in the kitchen. Which again, looks pretty awesome.

However, if there was one thing (okay, one of the things) that bugged me most about this house? The cabinets. They’re solid oak cabinets and Kevin swears he would have sanded them down and re-stained them, and I’m sure he would have done a great job, but they’re butt ugly. I hated them on sight. And thinking as a women, I think they would have turned away potential renters because everything else in the house will be new, and then you have these gawd ugly, 50-year old cabinet eyesores.

So I talked Kevin into going to Lowe’s and just looking at cabinets. Then, when we found one we really liked, I talked him into just seeing how much they would cost. No frills, just straight cabinets. And then we found out they were having a 10% off their cabinets sale, and then we found out we could get an additional 5% off if we used the Lowe’s credit card and what if we knocked another $800 dollars off if Kevin took the cabinets out instead of the cabinet guy?

NOW the price is looking a little more attractive.

And we went for it. And I CAN’T WAIT to get those puppies in there – it is going to look soooo good! We (I) picked a dark cherry cabinet and with the creamy whitish tile and a creamy whitish backsplash with brand new black (because they’re cheaper) appliances, it’s going to look AWESOME to a potential renter.

Our contractor guys haven’t been by in several weeks. We couldn’t decide on the type of wood floor we wanted so we encouraged the contractor guys to take another job they had lined up and told them we would call them when we were ready for them to put the wood floors in.

We looked for about three week(end)s for something and finally, FINALLY, a saleswoman at Color Tile found this rich pecan wood that we both fell in love with immediately. We thought at first we wanted lighter wood in the house, but again, I finally wore Kevin down and we settled for a darker wood. (Kevin was worried the darker wood would look too dark in the room with fireplace, but I think (hope) it’ll look okay together). I know it’s going to look good with the kitchen tile …

So Kevin spent yesterday taking out the old cabinets. He put another ad on Craigslist and practically gave the cabinets away to the second person who came to look at them. But it worked out great because the guy is a pastor at a church and they will shine them up and put them in a little old lady’s home who was with the pastor when he came to look at them and acted like a kid on Christmas morning (according to Kevin – I was at work). We feel good they will have a good home, we saved money by not having the cabinet guy take them out and we made a little money on the side as well as helped out a woman.

Here’s a video of the house as it stands now …