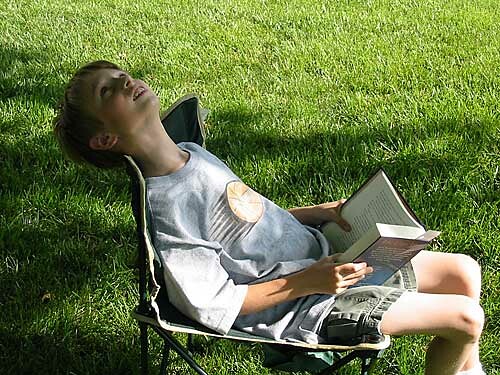 This is the one and only picture I have of Brandon reading – and I don’t think I have a picture of Blake reading at all, (unless he’s doing homework and that certainly doesn’t count).

Our kids have never been into the outdoors. The only thing they ever wanted to do was play video games. We tried to discourage this, or at least balance out their time playing video games with other things, but when they got to middle/high school, we just sort of gave up. Why make them stop what they truly loved doing? I would be pretty upset if someone told me I couldn’t read, blog, or watch my favorite TV shows.

During the summer months, we tried to get the boys out and about. The picture above was Brandon “reading” Harry Potter outside (he never finished it and I’m pretty sure he’s only seen a few Harry Potter movies – again, not a big fan, unfortunately). It was an attempt to get him to do something other than stay inside and play games. 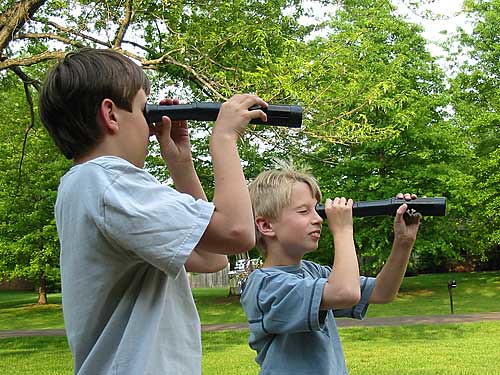 I mean, there were moments when the kids would go outside and play. And they both have pretty good imaginations so they would ultimately re-enact a “boss” scene in a video game or be characters from some game. I wasn’t going to split hairs – I was just happy they were getting fresh air.

And the times I wouldn’t let them play games? (Because there was a time when I tried to monitor their game playing, to try and balance it out with joining the real world, I got this: 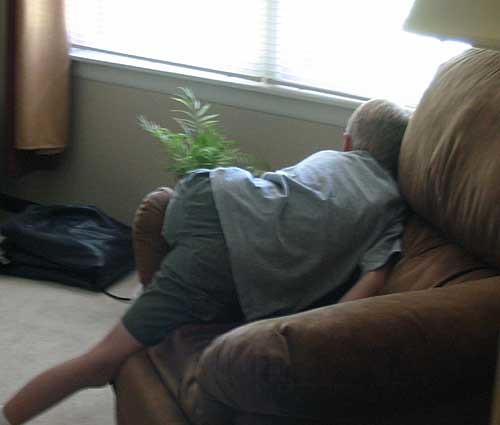 But you know what? Boredom is not bad for kids, in fact, I strongly believe it helps them develop creativity.

We went for family bike rides, (which we’re wanting to do again, but when it cools off – our city has expanded our bike trails and we thought it would be fun if we packed a picnic lunch and rode to the lake or something since Roy has FIVE bikes now – the joys of hunting garage sales), and walked the nature trails a lot.

Again, just something to get the kids out of the house and breathing some fresh air.

But all you can do is lead a horse to water, you can’t make him drink it. 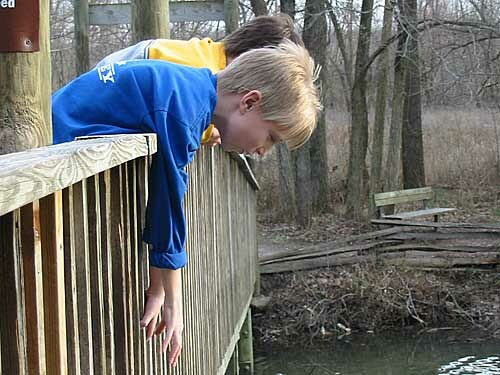 We went swimming a lot when the boys were in grade school. We tried to go a lot when they got into middle/high school, but by that time, they were self-conscious about their bodies and girls, so we didn’t go as much. Swimming was one thing they both loved to do outside, so we took advantage of that. I’m not personally a big fan of swimming mainly because I’m not a strong swimmer, but the boys really enjoyed going off the diving boards, over and over and over again. By the end of summer, they were both sporting pretty fantastic tans.

So yes, we tried to introduce the boys to different outdoor activities, and though they didn’t hate the things we did, they weren’t really into it, either. They just sort of … tolerated our efforts, I guess.

Your kids will grow up and develop their own interests/personalities. All we can do as parents is teach them to be good people and then step back and allow them to become good people. 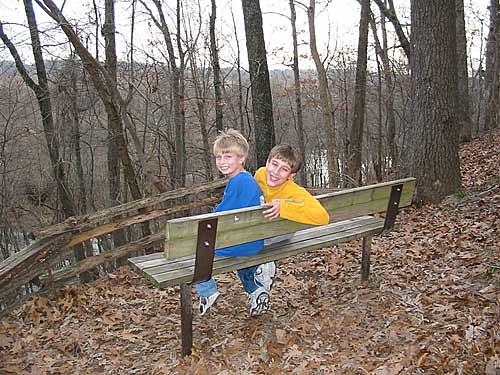