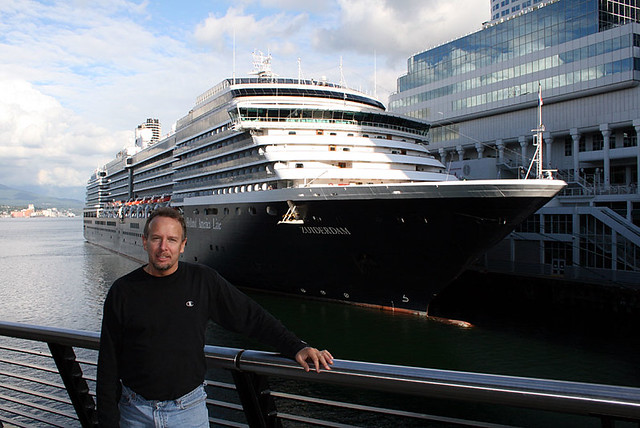 Still waiting to board our cruise ship to Alaska. This was back in October 2013.

We chose Holland America. It was the last cruise to Alaska in 2013. It was a smaller boat and full of old people, we were one of the youngest couples on board. It was comfortable though and we thoroughly enjoyed it. It won’t be our first cruise line choice in the future, but we certainly don’t regret sailing with them.

If you’re ever in the market to take a cruise, TIP: stay overnight in the city where your shipped is docked. We flew down the same day our cruise was set to take off (it was our first cruise – rookie mistake) and very nearly didn’t make it in time. It was one of the most stressful times of my life and we vowed NEVER to do that again. Yes. It’s more expensive, but it’s money well spent in the end because you arrive, get to do a little sight-seeing, get a good night’s rest and arrive in plenty of time to board the ship the next day.

And speaking of cruises … I don’t think we’re going to have the money to go on a cruise this year. Which is very disappointing as this will be our 25th wedding anniversary and I’ve always told Kevin I would love to go to Hawaii for our 25th anniversary. I wanted to take a seven-day cruise around the Hawaiian islands this year but wow – expensive. And we would have to cash in ALL of our AA airline points THEN SOME and well, money is tight. We’ve been fixing up the rental house and … life happens. So. I know Kevin feels bad about it but I don’t want to stress him out so I have firmly declared that we’re taking a staycation this year.